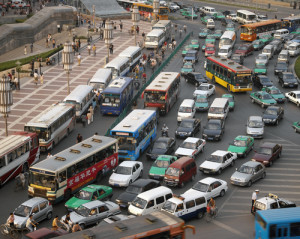 A smart cities approach, including a mobile app for traffic management, produced over $10 million in value in five months for Ningbo, China.

The city of Ningbo, with a population of 1.5 million on China’s eastern coast, was facing many of the same issues seen across major global urban areas—traffic congestion, citizens’ demands for prompt, effective services, and the need for real-time monitoring of the delivery of these services. The city government needed an automated solution to help tie together data from various vehicles and touchpoints across the city.

The city government turned to multiple connected Big Data and cloud-computing platforms to support a ‘one-stop’ service for citizens and government employees, generating and processing real-time data, including travel information on the transport system, as well as traffic reports and parking information. The project was launched in September 2013.

The city contracted with ZTE, provider of a smart cities solution called iCityBOSS, which is designed to pull together data from government institutions and businesses to offer citizens access to a variety of smart-city services—including offering bicycles for the ‘last mile’ of journeys—all delivered via a single cell phone portal. The new tool also helps the local government forecast operational capabilities to improve delivery of public services.

iCityBOSS consists of three private clouds—one for the traffic police, another for the transport committee and a third for the city management bureau—and one public cloud. The solution also include a mobile app made available to the public. The solution is built on TM Forum’s Frameworx, a standardized suite of tools, best practices, pragmatic guides, information and process blueprints, and more that apply to all kinds of digital businesses. It was developed and constantly evolves through the collaborative efforts of professionals from more than 900 member companies from telecommunications, utilities, finance, digital health, cloud service providers, and social media. It is deployed by more than 90 percent of the world’s communications service providers.

Using the Forum’s Business Process Framework meant iCityBOSS could handle cloud-based machine-to-machine (M2M) interactions between those clouds. ZTE also used the Forum’s Multi-Cloud Service Management series of guides and tools to support its cloud and infrastructure management, one of the key elements of the Forum’s Open Digital Ecosystem.

So far, the iCityBOSS mobile app has been downloaded 1.2 million times and has about 200,000 active users in Ningbo. On average, passengers save 10 minutes’ waiting time on a 50-minute bus journey and  15 minutes by finding a parking space in the city center more quickly.

In its first five months, the networked open data solution and Big Data solution saved the city $163,000 in traffic management and facility maintenance costs; $1.6 million by avoiding potential duplicated government spending; and generated $8.2 million worth of value for businesses in the city through new job opportunities.

The Ningbo city government estimates it is saving $4.9 million a year through more efficient traffic management, overall better coordination, and by enabling assets to be shared by several organizations. For example, with a complete picture of the traffic network, staff in the central control room can arrange and guide emergency vehicles through jammed streets to reach the destination as soon as possible, coordinating their efforts with the traffic police and hospitals.

In addition, annual revenue via transportation ticket sales and parking is now about $2.3 million, projected to rise to $3.3 million in 2015. Around 600 coach tickets are sold every day via the iCityBOSS mobile app and more revenue will be generated from train tickets sales and other sources in future.

The smart cities movement is a broad initiative that covers education, digital health services, energy and infrastructure management, government services and much more. For the city of Ningbo, an open, standardized, proven approach to this large-scale deployment was key to its success, enabling faster integration of the solutions’ elements and processes, reducing risk, and keeping costs down including by avoiding high levels of customization.

“By bringing together multiple social media tools, our product provides a network for citizens to interact with,” says Chen Jie, senior vice president of ZTE. “We actively encourage customers to contribute not only their user experiences and comments, but also information on issues they encounter around the city. Combined with location data and their real-time GPS coordinates, this means we can offer a better traffic information service for citizens, which is cutting the average waiting time at junctions and the accidents rate.”

The city plans to evolve iCityBOSS into an operational platform for individuals, enterprises and communication service providers.