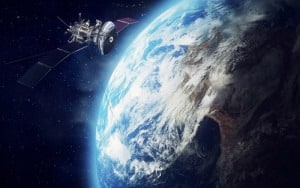 Once only for agencies like NASA, now real-time satellite imagery of Earth could be made available to the private sector if EarthNow gets its way.

Many have taken advantage of satellite imagery of the type provided through Google and Microsoft. The catch is that the imagery may be months, or even years old. An audacious new project seeks to change all that, providing real-time video views of the planet from a network of satellites.

This is stuff formerly only available to military or spy agencies, now open for all to view. The venture, EarthNow LLC intends to deploy, at a yet-to-be-announced date, a large constellation of advanced imaging satellites that will deliver real-time, continuous video of almost any spot on Earth. The company, a recent spinoff from Intellectual Ventures, is backed by Airbus, the SoftBank Group, Bill Gates, and Greg Wyler.

“Our objective is simple; we want to connect you visually with Earth in real-time,” says Russell Hannigan, founder and CEO of EarthNow. End-users will be able to see illuminated objects and events at night including buildings in towns and cities, traffic on the roads, ships at sea, fires burning in a forest, flashes of lightning, and space debris burning up in the atmosphere.

EarthNow’s constellation is designed to ensure that at least one satellite is always above most places on Earth. Each satellite will be equipped with onboard processing to enable real-time interpretation of the video captured by the imagers, providing continuous and intelligent video of the Earth from space. Other observation satellite systems deliver pictures and sometimes video clips to users many minutes, hours and even days after they are requested.

EarthNow will take advantage of an upgraded version of the satellite platform, or “bus,” developed originally for the OneWeb communications service. Each satellite is equipped with significant amounts of onboard processing power. Airbus, which has experience in satellite systems, plans to mass-produce the satellites using their advanced production lines in Toulouse and Florida.

The constellation will be deployed in phases, eventually reaching hundreds of satellites in number, the company says. In the first phase, the satellites will cover the vast majority of targeted markets, and future enhancements will deliver 100 percent pole-to-pole global coverage. Each EarthNow satellite will be constantly connected to the ground network, thereby ensuring real-time availability on a global basis.

EarthNow says it will offer commercial video and intelligent vision services to a range of government and enterprises. Applications include catching illegal fishing in the act, watching hurricanes and typhoons as they evolve, detecting forest fires the moment they start, watching volcanoes the instant they start to erupt, assisting the media in telling stories from around the world, tracking large whales as they migrate, helping smart cities become more efficient, providing on-demand data about crop health, and observing conflict zones around the world.

In parallel, EarthNow plans to create compelling “live Earth video” mass market applications that can be accessed instantly from a smartphone or tablet. “With EarthNow, we will all become virtual astronauts,” said Hannigan.

A release schedule has not been divulged, and the company says it is “in discussions with several launch providers.”