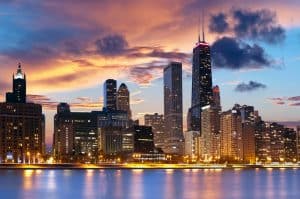 The smart lighting project is one of the most extensive smart technology infrastructures in the country relying on edge technology and focusing on the use of greener energy, carbon footprint reduction, and more.

The city of Chicago recently completed a massive, $160 million project to modernize the city’s light system. It will not only improve night time visibility but is projected to save taxpayers $100 million in electricity costs over the next decade. The Chicago Smart Lighting program replaced nearly 300,000 lights with energy-efficient LED versions. Each light contains wireless nodes connected to the grid. The network detects a missing light, creates a repair ticket, and automatically assigns a repairperson. This type of automation helps reduce costs and improve overall lighting conditions.

So far, the new lights have already cut the city’s electricity bill in half. In addition, the city will also save money through rebates offered by the utilities firm ComEd for switching lighting sources to energy-efficient ones.

See also: Smart Cities Look to the Edge for Next Level Urban Planning

Chicago hopes the upgrades will offer a template and model for other cities around the country adopting smart initiatives. According to Chicago DOT, project Light is one of the most extensive smart technology infrastructures in the country. The focus on greener energy and reducing carbon footprints is an ESG focus for many municipalities, and the project hopes other cities will follow its lead.

The project also focused on equity during its implementation. The program set a Minority Business Enterprise goal of 26 percent participation and a Women’s Business Enterprise goal of six percent and exceeded both goals. A focus on diverse hiring included several provisions: 50 percent of the workforce must be Chicago citizens, and ten percent must consist of those from socio-economically disadvantaged backgrounds.

Together, this project offers a look at how future equitable, environmentally-focused projects may proceed as cities grapple with new environmental regulations. The project will act as a blueprint for other similar projects in other cities.