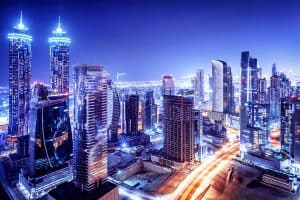 Edge and IoT, data analytics, and computer vision give cities an edge on a digital future.

As cities continue to grow, the deployment of the Internet of Things (IoT) and edge computing technologies can help to maintain public order and safety and create the ideal safe city.

It’s expected that 7.5 billion people will live in cities by 2050, about as many as live on Earth right now. For countries that lack on-the-ground resources, technology could provide a way to improve the effectiveness and efficiency of public and emergency services, without major expenditure.

China has been an early adopter of closed-circuit television (CCTV) camera footage (also referred to as video surveillance), using it as a form of crowd control and facial recognition.

In the West, governments that want to establish safe cities first need to consider privacy and security, especially when using facial recognition. When done right, predictive policing and real-time crime mapping, for example, can save lives and significantly reduce crime.

The deployment of IoT and edge technologies, alongside 5G, is seen as key to unlocking a new evolution of public services. By gathering data, analyzing it, and embedding artificial intelligence, cities could receive recommendations on how to improve.

Forty percent of all IoT data produced is video surveillance. But in countries like the UK, much of that data is monitored manually or filed away without ever being viewed. Harnessing that data could reduce crime by up to 40 percent, through crowd detection, vehicle tracking, and facial recognition.

The police are not the only department that would benefit from IoT and edge deployments. Emergency services could see their emergency response times slashed by 20 to 30 percent with optimized dispatching and synchronized traffic lights.

Learn more about how edge and IoT solutions are giving cities an edge on a digital future below.

SEE ALSO: Understanding Edge Computing and Why It’s So Important