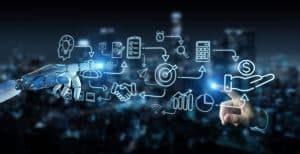 In 2016, Gartner coined the acronym AIOps (Artificial Intelligence for IT Operations), but years before that, IT professionals were already hearing about and experiencing elements of autonomous computing. Such automation technology enabled mainframes and servers to make automatic and adaptive decisions and adjustments so they could respond to what sensors embedded throughout their operations were informing them about performance.

Whether it is it AIOps or autonomous computing, the goal was always to assist IT in monitoring and tuning performance so it could get the most out of computerized assets and deliver optimized technology to the business. IT is bullish on AIOps, as evidenced by the 21.05% compound annual growth rate that is forecast for AIOps solutions between now and 2026.

So, what makes AIOps such a compelling value proposition?

For overworked systems programmers, network administers and software developers, AIOps can surface the most urgent problems from a haystack of daily alerts and potential performance issues that may or may not require immediate attention and resolution. These alerts come from everywhere, thanks to the number of siloed systems that corporate IT departments must manage. There are times when those alterts create more distractive noise than help.

Where AIOps helps in how it whinnies down this cacophony of alerts to the critical conditions that are truly relevant to an incident or an outage. It does this because it uses artificial intelligence and machine learning as it tracks the elements and dynamics of an organization’s IT infrastructure, and learns what is normal and what presents a problem. Equipped with this knowledge, AIOps identifies and issues alerts as earlier system approaches did. However, what makes today’s AIops unique is that the AI included with operational monitoring now takes AIOps into the realm of infrastructure observability.

Observability is a difference maker for IT because it is able to combine contextual information gathered from IT infrastructure with artificial intelligence and automation instead of just issuing standalone alerts from individual system components that IT must separately evaluate and troubleshoot. With a more holistic approach to IT infrastructure evaluation that includes infra- structure knowledge as well as problem detection, AIOps observability uses IT metrics, logs and traces and issues diagnostic recommendations for fixes that IT can use to speed time to problem resolution.

In practice, an AIOps observability platform can integrate the various systems, data and networks that an application flows through. In a hybrid computing environment, this could mean traversing application workflows that go through a cloud as well as on-premises resources. Any one — or all — of these resources could issue an alert if performance degrades. Without AIOps observability, IT can find itself evaluating numerous incoming alerts from many system modules  and elements, without an efficient means of separating the  alert “noise” from the root cause of a problem. This goose chase lengthens system downtime and performance issues. It creates unhappy users and customers and can cost a company an average of $5,600 per minute.

For example, if the AIOps software understands the dynamics and the operational context of your IT infrastructure, it can quickly pick up anomalous activity from a field service branch on the East Coast that typically is closed on weekends, but suddenly registers a surge of activity on a Saturday.

AIOps can detect if a server or a router on your network is at or near capacity, and if that excess capacity utilization is normal for a particular situation, such as the busiest processing time of day or a spike in activity that is due to an e-commerce promotion.

In the area of application testing, where multiple virtual systems are spun up for test but can be forgotten after work completes, observability can identify these idle assets so they can be de-allocated.

In a hybrid on prem-cloud environment, AIOps observability can inform an application developer in real time if there is a clog somewhere in the end-to-end application workflow that is bogging down performance.

The result is IT runs better, applications are delivered to the business sooner, and downtime is reduced.

The state of observability

That said, AIOps observability is still in early stages of deployment in many organizations.

One challenge is that not all IT departments understand exactly what observability — a somewhat nebulous word — means. If, instead, observability was understood  as “informed observation” that is facilitated by AI and machine learning, the uptake of the technology might move faster, and its value unlocked.

Having served as a CIO for more than 20 years, I do know two things:

First, CIOs and IT hate downtime, going on wild goose chases and having to calm the emotions of users, customers, and management while IT figures out what went wrong in a complex application that touches many systems.

Second, if we can put an end to those marathon “war room” meetings which continue to occur in 2021 just as they did in 1981, finger-pointing would be less and staff morale would be higher. AIOps observability would better equip everyone involved, from the DBA to the application  developer to the systems programmer with an actionable, single version of the truth.

Mary E. Shacklett is President of Transworld Data, a technology analytics, market research and consulting firm. Prior to founding the company, Mary was Vice President of Marketing and Technology at TCCU Inc., a financial services firm; Vice President of Software Development at Summit Information Systems, a commercial software house; and Vice President of Strategic Planning, Manufacturing and Technology at FSI International, a multi-national semiconductor company. Mary has business experience in North America, Europe and Asia and is conversant in French and German as well as English. She has a B.S. degree from the University of Wisconsin, an M.A. degree from the University of Southern California, where she taught for several years, and a J.D. degree from William Howard Taft University. Mary is a noted technology analyst and commentator who is listed in Who’s Who Worldwide and in Who’s Who in the Computer Industry. She is a keynote speaker, and has over 1,000 articles, research studies and technology publications in print. Mary may be reached at [email protected] and at 360-956-9536.