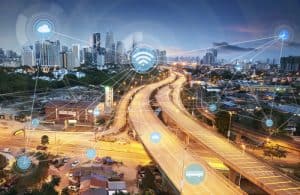 Tomorrow’s smart city will rely on edge computing infrastructure to leverage the most out of the up-and-coming data-driven tech of the future.

Edge computing keeps data processing when the connection is unreliable, through gathering and processing data at the same location. Self-driving cars and other IoT devices have to be built with sufficient processing power that they can perform some work themselves, at the edge, without sending it to the cloud.

Without edge computing, the driverless car would be incredibly unsafe because you would be completely reliant on the connection to stay on the road. Driverless cars are important to the smart city’s network of automated taxis and delivery services.

Typically IoT devices, including all the elements of smart cities, connect to the Internet through cloud connections. However, due to the incredible issue of safety related to roadways and other infrastructure, smart cities are implementing edge computing strategies as well. Again, the key with edge computing is that proximity, keeping the data at the location – or as close as possible to the location – where it is generated or collected for processing. That means the roles of storage and processing transition from cloud servers to the computers at your network’s edge, as near as possible to the devices.

See also: Data control issues and the booming edge — what to expect this year in cloud

edge computing, you can ensure that your services continue to flow through local data processing whenever the Web connection is offline. In this manner, beyond improving your reliability, you are able to minimize the data that you transmit and contain your network load.

When you take the data hubs of smart cities and introduce the principles of fog and edge computing to them, you transfer the intelligence that is currently centralized to a local collection of Internet of Things sensors and gateways.

With edge computing, you become more immediately responsive to situations. When organizations use this technology, they improve the quality of data that is gathered by performing analytics at the site where the data is gathered – again, location, location, location is the point with this technology. Edge computing also allows you to reduce network latency that can occur when only using the cloud – and (in so doing) can improve your speed.

Building high-speed network connections through edge allows you to send CCTV, high-resolution video, and other high-quality data to central control efficiently. Smart cities can facilitate law enforcement as well. A vehicle tag recognition app that is on an edge gateway could allow police to look through parking lot cameras and find a certain car.

Services that could be launched via edge computing include:

For proper functioning of the network of automated taxis and delivery services that could soon be crisscrossing our cities, edge computing is a natural solution. That truism is backed up by the driverless car platform from EdgeConneX, which is served by edge data centers.

For self-driving cars and other data-heavy projects (particularly ones that produce terabytes of data in an hour), keeping costs contained is challenging. The expense of bandwidth and getting latency within reasonable limits is prompting companies to process some data as close as possible to its origin.

After all, the amount of data created by driverless cars is staggering, as noted by Renovo chief commercial officer Damien Scott. Scott said that each car has a number of LIDAR scanners and ten HD cameras, accounting for a large chunk of the 2 to 5 kilowatts of processing power each vehicle has onboard.

50 TB of data can be generated by just one self-driving car running for a day, assuming heavy use (which would be expected of public-use self-driving cars) of 14 to 16 hours on the road; after all, they can generate 1 TB to 5 TB per hour. This usage pattern would amount to 20 petabytes of data annually per vehicle. A single city would create 100 exabytes of data per year if it had a fleet of 5000 autonomous cars. That is a lot.

“Smart infrastructure needs to be ‘always up,'” wrote Eggplant CEO Dr. John Bates in SmartCitiesWorld. It’s true: reliability of a system that changes traffic lights saves lives. Dr. Bates further commented that the embrace of edge computing for smart cities will provide a stronger user experience for citizens. Whether you are building smart cities applications or have other data-heavy projects, you could benefit from integrating edge computing with your public cloud infrastructure. The right data center partner can help.