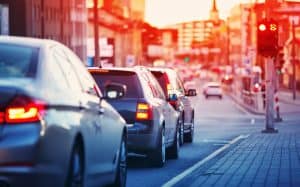 Dealing with traffic may be a fact of life, but researchers from Texas A&M University, lead by professor Guni Sharon think that should change. They’ve verified a possible new traffic signal learning algorithm that could reduce vehicle delays by up to 19.4% over the current solution.

Traffic lights already have simple computers controlling operations, but the team explored ways to make the process more efficient by reducing backups and smoothing traffic flow. The result is a self-learning traffic signal system that coordinates the activity at intersections thanks to machine learning.

See also: How Traffic Congestion Takes a Toll on the Economy

How the new system will work

Signal controllers control traditional operations. However, with rigid programming, they’re limited in the ability to control traffic based on changing conditions.

The team’s learning algorithm uses reinforcement learning. Favorable outcomes are rewarded, allowing the new controller system to make decisions and improve based on the results. The outcome would be reduced backups and more efficient flow.

In a controlled environment, this tends to work out well. In the real world, the way controllers make decisions is unpredictable, thanks to deep neural networks. Traffic engineers don’t have room for error, so it’s a burden to make sure the outcome is the right one.

The team validated a slightly different approach. The DNN learned in real-time in the real world while transferring what it learned to a different control function. This allowed traffic engineers to understand and regulate the choices.

What researchers did to fix the traffic signal problem

We aren’t going to see AI-powered traffic signals just yet. It took roughly two days for the controller to learn what mitigates intersection issues. The future of the project is to hasten training time by using a currently deployed controller. Machines will observe the deployed controllers to ensure baseline performance that improves over time.

The Department of Computer Science and Engineering team will continue to research the algorithms to perfect their use before officially deploying in the real world.