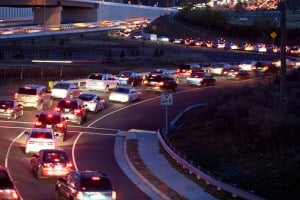 The total annual cost of traffic in Europe and the United States will soar to more than $220 billion by 2030.

Traffic congestion is inevitable in large and growing metropolitan cities and countries across the globe from Sydney to Sao Paulo, and Los Angeles to Tokyo. Inescapable peak hour traffic is an inherent result of limited infrastructure compared to vehicles on the road, and the way modern societies operate. Of course traffic congestion can be avoided in several ways, most notably refraining from moving around at the same time each day.

However, given that the clear majority of people are compelled to travel during rush hour whether for work purposes, running errands such as dropping off kids at school or simply to interact with others, the issue of traffic congestion becomes even harder to resolve without crippling our economy and society.

Further, statistics indicate that a vast majority of people in the United States who travel during rush hours do so using their own private vehicles for two good reasons. First, the infrastructure in low density areas does not support some forms of public transit, and even if it did, it is highly inconvenient to say the least. Second, most people travelling during peak hours need to make multiple trips, which with public transit can be an expensive and tiring ordeal.

With an astounding 88 percent of America’s daily commuters using privately owned vehicles, and millions wanting to commute at the same time each day, the country’s infrastructure does not have the capacity to handle peak hour traffic. What vehicles on the road are forced to do is queue up for that limited road space aka the true definition of congestion. However, compared to other countries around the World, America’s roads score well in terms of infrastructure. As you’ll soon see in the data, there are many other countries with much larger congestion issues.

The harsh reality is that we are plagued by this diverse issue so much so that it affects not only daily commuters, but takes a considerable toll on businesses big and small, and consequently employee wages.But while the commuter’s main concern is rush hour traffic, corporations view it as a serious cost imposition, which differs quite considerably from the view of commuters.

A survey of several thousand businesses representing 12.3 million U.S. employers and approximately 150 million employees revealed that congestion generally affected them through shipping and receiving, customer contact, daytime business travel and commuting. Most businesses affected by traffic congestion were located in the Northeast corridor of the United States such as California, Georgia and Texas, and attribute most of this issue to street, traffic or system problems such as accidents, constructions, poor road designs and traffic signals.

To break it down further, employers most concerned with congestion were located in downtown, central city but not CBD, suburbs in growing areas and downtown, on 2, 5 or 4 lane roads with no median. Congestion affects corporate activities such as logistics and distribution, client meets and shipping/receiving, and also limits worker availability and productivity by affecting employee’s commutes.

Shipping delays can cost employers an arm and leg as much as $21/hr in typically labor rates and a whopping $5+ billion annually in the United States alone. Just like congestion, shipment delays aren’t just limited to specific areas, but occur throughout the country. Apart from shipment delays due to congestion, many employers require their employees to drive regularly as part of work for several reasons including sales and operational/service activities and meetings with clients.

In terms of numbers, that works out to 39 percent of businesses that require employees to drive, but the percentage of employees driving could vary widely. However, not all employees driving for work purposes are delayed by local congestion, but on average this number works out to approximately 16 percent. When looking at the bigger picture, business related driving hours in the United States accounts for 24 billion annual hours, which is a little less than the estimated time to commute at 33 billion hours annually.

Costs of congestion in the trucking industry

Trucking operational costs due to congestion on the interstate highways were in excess of $9.2 billion in the year 2013. These numbers were based on research performed by the American Transportation Research Institute (ATRI) – a non-profit entity for the trucking industry. To determine the delays and costs of each mile of the highway, the ATRI combined the financial data of motor carriers with billions of GPS points.

The results indicated that an upwards of 140 million hours were lost in productivity, which equated to an excess of 50,000 trucks sitting idle each working year. Furthermore, these results by the ATRI confirmed that states, counties and metropolitan areas topped the list in congestion costs, with California taking home the gold with over with over $1.7 billion.

Cost of traffic congestion on wages

An average driver in the United States spends more than 30 hours per year in traffic jams, which equates to more than $1000 in lost wages. Research performed by Global Positioning Specialists (GPS) revealed that commuters in Sydney lost nearly 6 percent of their annual wages due the city’s heavily congested roads. The study took into account the number of hours lost sitting in jam-packed traffic during rush hour in 108 cities across the world.

Global Positioning Specialists then combined this data with the average salaries in each city to determine the wages lost for workers on hourly contracts. The Harbor City named Sydney grabbed first place in Australia and earned the 17thspot worldwide, with traffic congestion costing commuters $3300AU annually in lost wages. In fact, Sydney was the only Australian city that made the cut to the top 20 list, and was a few steps ahead of several European cities including Milan, Paris and Sao Paulo.

Just like the old saying goes – time is money

After factoring in rising living standards, projected population growth as well as costs attributed totraffic congestion such as decreased productivity, wasted fuel, and higher prices of goods owing to rise in transportation costs, researchers forecast that the total annual cost of traffic in Europe and the United States will soar to more than $220 billion by 2030, a rise of nearly an alarming 50 percent from 2013.

How car trackers and GPS units can reduce congestion

One of the noteworthy features of GPS systems is their ability to detect traffic jams,and help you avoid them in real time. This real time data about traffic flow and weather combined with suggestions on the least congested path takes away the guesswork and allows drivers to choose the best possible route.

This in combination with a car tracking device allows corporations to get the most efficiency from their employee’s daily commutes. Car tracking technology has advanced extremely quickly in the last few years, and now there are a multitude of features that would attract enterprises. The two most notable features in relation to cost reduction is fuel monitoring and driver behavior monitoring. By connecting the car tracker to the fuel line, you can get a top-level view of the fuel consumption so you can make amendments to reduce consumption. Coupled with driver behaviour monitoring, which determines whether the drivers been braking, turning and accelerating too hard, it really becomes a lethal combination.

--Luca Samson has been intrigued by engines and vehicles since a young age and is now founder of Car Trackers Club. He has written an introductory guide on getting started with car trackers.