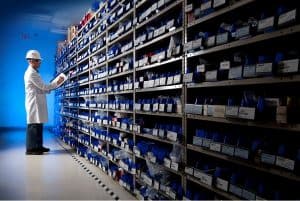 Low code development platforms open the door to many new types of applications in manufacturing. Perhaps the greatest promise of the technology is when it is used to bridge the gap between what has traditionally been the different realms of the operational staff and IT. Optimizing spare parts inventory is an example of the new type of cross-group application that is possible. Such an application brings company-wide benefits that simply were not achievable before.

Space allocation and facilities management teams get pulled into the spare parts management discussion because service teams need physical space to store the parts. Procurement and accounting teams have a toe in the water because they must order and pay for the parts. And even corporate management needs to be (somewhat) aware of what’s going on. A prolonged outage due to the lack of a spare part impacts output, revenue, and company reputation.

A series of technology and business developments have led to this moment in time where the right solutions can digitally transform spare parts inventory.

For years, manufacturers used calendar-based maintenance that relied on vendor-supplied information about a part or piece of equipment’s lifetime and repair history. MRO groups would plan inspections, service, and parts replacement based on mean time to failure (MTTF) and end-of-life data. Spare parts were ordered based on the device vendor’s replacement schedule.

There are two flaws in this approach. One is what happens if a part breaks or stops working sooner than the part vendor’s MTTF estimate? The other is what if the part has more to give beyond the end-of-life estimate? The traditional way to deal with both situations was to overstock on spare parts in case there was an unexpected failure. And replace parts on the vendor’s timeline, even if they continued to function properly.

Such a non-elegant solution addressed immediate problems but at a cost. Issues with overstocking include:

Simply put, more can be done to improve the situation. Enter low code development and IoT. Manufacturers have been using IoT data from equipment in their plants to move away from traditional calendar-based maintenance. Low code development platforms let them take that data and create applications that complement and enhance the capabilities of supervisory control and data acquisition (SCADA) and other OT systems.

Specifically, manufacturers have been moving from a fix it when it breaks mode of operations to reactive, proactive, and predictive/preventive modes.

A reactive mode might take IoT data about a device’s status and OT systems data, such as alerts and alarms, and trigger an MRO action. For example, noting that a certain part is running above the vendor’s suggested peak operational temperature, a custom-developed MRO service application using that data could automate the generation of a trouble ticket and service call.

A proactive mode might use an application that takes the data from devices and OT systems and applies analytics to spot problems in the making and address them off before they cause downtime.  For example, while a device might be operating within the vendor’s specifications, analytics in an MRO application might be used to notice that, for example, a critical motor is running at higher and higher speeds to complete the same amount of work. That derived insight could be used to initiate an inspection of that part. Upon inspection, an MRO staffer may conclude it is better to replace the part rather than risk its failure.

A predictive/preventive mode goes a step further. An MRO service application might be developed that uses artificial intelligence, machine learning, or other advanced analytics techniques to draw inferences from parts and machine data. Such predictive analytics of the data might find something very specific. When part A from this vendor experiences a 20% rise in operating temperature in 15 minutes, that is a precursor to failure in three days. Armed with such information within an MRO service application, a technician could be dispatched to do a pre-emptive part replacement to avoid a failure.

Tying everything back to spare parts inventory optimization

A low code development platform might also be used to build an application to marries the MRO system insights and actions to an ERP system used to order parts.

An advantage of combining preventive and predictive maintenance solutions with ERP is that it allows for more efficient use of existing parts. The old approach of replacing parts based on the average recommended lifetime takes some parts out of service that could keep working for many more days, months, or years. The organization loses that extra useful service life it could get from the part and burns through more inventory than need be the case.

Such a system would make certain required spare parts are in-stock when needed, thus avoiding unnecessary downtime waiting for a critical part to ship. It also guarantees parts are not overstocked spare parts, thus reducing the need for excess storage capacity to house the parts. This also reduces the chance of having outdated parts.

In essence, creating new applications using low code development platforms and IoT can lead to innovative solutions to old problems. In the case of spare parts inventory, manufacturers could develop a type of “just in time” approach to spare parts. The result is a more optimized method for inventory management.