Home / Analytics / Are Autonomous Buildings on the Horizon?
Sponsored by Vantiq 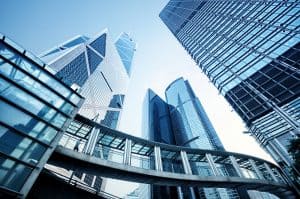 Smart buildings seek to automate many operational aspects of running a building. Efforts typically focus on heating/cooling and energy use. But work has greatly expanded to other areas. For example, smart lobbies and smart elevators are gaining great interest. Autonomous buildings aim to take things to a higher level to reduce the costs of maintaining a building, optimizing the structure’s environmental impact, enhancing the occupants’ comfort, and increasing security.

The term autonomous building is subject to many interpretations. Similar to the use of the term like self-driving cars, there are many levels of automation to progress through to be truly autonomous. For example, automation with autos includes:

A similar progression is starting to develop with buildings.

Some view autonomous buildings as more than smart structures. There is great interest in marrying intelligent automation with sustainability.

Last fall, LendLease Digital hosted an autonomous building summit. The day-long event was hosted by Bill Ruh, the company’s CEO, and brought together international thought leaders from government, property, construction, technology, and industry. It featured speakers from Google Cloud, Intel, the MIT Real Estate Innovation Lab, Ernst & Young, the Object Management Group, the Smart Cities Council, and more. And topics ranged from smart estates to the ICU of the future.

Part of their discussion was on MIND Milan. Milan Innovation District (MIND) is a major new district for science, knowledge, and innovation on the former Expo site in Milan, Italy. The new district’s masterplan includes the development of a hospital, university, and international research center. The project’s focus is to build sustainable urban facilities that automatically adjust to conditions and make efficient use of resources. It is one of the many showcase projects for autonomous buildings emerging around the world.

Another project that is garnering much attention is the Bouygues Construction ABC (Autonomous Building for Citizens) demonstrator program in a neighborhood of Grenoble, France.

The ABC demonstrator is a residential complex designed to be water and energy self-sufficient and more comfortable for the people who live in it. According to the company: “The concept is extremely ambitious, and this 62-apartment residence, which is designed to be energy self-sufficient, consume 70% less mains water, and optimize waste management, is its first concrete application in France.”

The project’s idea was to develop living space that would produce energy autonomously (using solar panels), use rainwater and recycle wastewater, and reduce the quantities of waste produced.

Many buildings are empty with the coronavirus pandemic or have a skeleton crew working to maintain the facilities. Many industry leaders believe autonomous systems are essential for business continuity. Organizations can no longer risk staff to maintain critical building infrastructure systems. Autonomous systems are needed to make decisions to adjust, change, or turn things on or off.

Specifically, autonomous buildings must do more than keep conditions within a specified operating range. Conditions change throughout the day in unpredictable ways. For example, heating from the sun varies by the hour and depends on cloud coverage. People move in and out of areas in random patterns. There is no way to pre-determine levels of lighting, heating, cooling, or ventilation. Systems must learn and regulate their own usage by continuously studying conditions and automatically optimizing settings without compromising comfort levels.

Autonomous building efforts will likely start with intelligent energy management systems. However, some of the projects underway, like Bouygues Construction’s ABC demonstrator, are including water and waste management systems as well.

Another operational aspect getting attention is predictive systems. Predictive systems typically use real-time and historical data about an asset to spot trends that might lead to problems. It makes inferences to help problems in the making. Once detected, an autonomous building would automatically trigger corrective action.

One also can envision autonomous building security systems. An example would be a system that analyzes video from a network of cameras for multiple purposes. Rather than having a guard watching monitors, such a system could be used to spot intruders or automatically open a door as a known occupant arrives.

Common challenges will include breaking down data silos. Many of the operational systems that are used in buildings are proprietary. Many that could share data often lack a conduit to get the data where it is needed.

Autonomous buildings will need access to any data and compute power capable of real-time analysis using artificial intelligence and machine learning. And before any of that happens, there needs to be a development environment with the flexibility to work with existing and new technologies as they emerge.

With such capabilities, autonomous buildings could start to take shape. Perhaps the greatest limitation to their use will be the lack of imaginative applications and use cases.