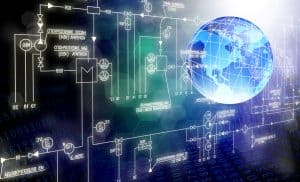 Low code development lets organizations invent entirely new automated processes and combine software elements that were not used together in efforts before.

The term automation gets thrown around a lot these days, touted as a key enabler to success. What is often not mentioned is that industrial automation has been around for decades. What’s new and why there is so much interest in automation new is the growing use of low code application development to help organizations quickly bring innovative industrial automated processes into use.

What’s the difference? Automation of old took a long time to develop and was static. For example, a manufacturer would hard code an assembly line robot to take action (e.g., paint, weld, or move) when a part passed before it. Or a process might be tightly defined, so when A happens (a solution is heated to a certain temperature), do B (add a reactant).

Certainly, these old school automation examples offered improvements over performing the same tasks manually. But in terms of modern automation applications, they are severely lacking.

Today, the automation of tasks and processes requires much greater capabilities, including:

Flexibility: Industrial organizations must content with quickly changing market conditions. A dispute between countries invokes tariffs mandating a switch to new materials or processes. Consumer demand for a product skyrocket due to a social media influencer’s recommendation. Whatever the cause, plant operations must quickly be revamped on-demand to meet the ebbs and flows of the market.

Customization: Rather than producing large uniform bulk quantities, it is quite common for an industrial plant to manufacture small lots of items, each personalized to meet a specific client’s specification. Examples range from customized printing operations enabled with an online ordering system to an auto manufacturer applying different polished finishes on cars to match a dealer’s order.

Data-driven: Industrial operations are increasingly moving from reactive and passive to proactive. In the past, inspections would be done on finished products, and key performance indicators (KPIs) assessed monthly or quarterly. Now, thanks to the availability of data from IoT devices, quality and KPIs can be assessed in real time. Rapid analysis of the data can be tied back to processes, and automation can make adjustments on the fly to maintain quality and optimize output.

Low code helps in all these areas. Rather than hard code something once and never touch it, low code development lets organizations rapidly create and test new automation applications.

In with the new

Perhaps the biggest value of low code used for automation is that it gets citizen developers involved. Who better to decide what can be improved through automation? Workers on the shop floor have a wealth of experience that ideally can be captured.

An example would be an equipment operator who knows that when the operating temperature rises 10 degrees unexpectedly, a breakdown is likely in 24 hours even though the device is working within design specifications. Automating such a rule of thumb with standard development method would be out of the question. But with low code development, the operator could put a decision automation routine together. Such an application could automate an obvious action like trigger a service ticket when the temperature rises by 10 degrees.

A modern industrial site could be more innovative. Automation might switch production to a lesser-used line and throttle back production on the current line until the equipment temperature drops.

Another area where low code and automation come together nicely is with respect to the connected shop floor.

In the past, most automation efforts focused on one process or one task. Automation would optimize that one thing. Today’s connected shop floor allows a broader view of operations. Knowing interdependencies throughout a production line or plant floor allows for end-to-end automation.

More advanced applications extend beyond the production environment. Increasingly, industrial companies are pushing automation throughout their organization. They are linking IoT status data from the shop floor to maintenance operations and spare parts inventory. Some extend automation of processes to the supply chain.

In all cases, low code development provides the opportunity to quickly try out and build new automation applications.

Low code lets industrial organizations invent entirely new automated processes and combine elements that were not used together in automation efforts before. Prime examples of new(er) automation applications are robotic process automation (RPA) and the incorporation of artificial intelligence (AI) into automation.

RPA is gaining favor for its ability to automate an end-to-end task. In the past, a process might be automated by coding in a sequence of steps that are carried out to complete the task. There might be some if-then steps that gives the process flexibility to take different actions based on conditions.

An RPA application could be designed to interpret information, work through heterogeneous systems, trigger responses, and communicate with other systems to perform repetitive tasks.

AI can infusion intelligent decision-making capabilities into a process stream. AI can be used to perform fundamental functions like image analysis and object detection along a production line. And it also can be used to examine data and understand conditions. Having such insights, AI can determine a next step and act.

Such automation applications must bring together a variety of software elements into a single cohesive application. Low code development helps make this process easier.