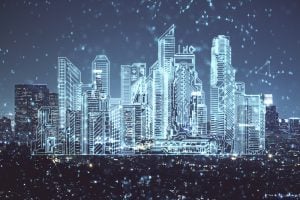 Citizens and governments will be connected in ways that we’ve never seen before. IoT will deliver huge opportunities and benefits to smart cities, but this level of interconnectivity will also bring its own set of challenges.

Smart cities, defined as areas in which technology is used for the betterment of an urban area, are already being utilized around the world to improve quality of life, efficiency, and reduce costs.

According to a report by MarketsandMarkets, the smart city industry had a market size of $457 billion in 2021, and that is expected to accelerate to $873 billion by 2026.

The driving forces of this are smaller sensors, part of the Internet of Things, which are able to collect and monitor everything from congestion, to pollution levels, to car park spaces.

With this data, smart cities are able to analyze and come up with solutions to improve life in urban areas. A city may use pollution and congestion statistics to reroute traffic, while also deciding to pedestrianize a street that gets a lot of foot traffic or only make it available for public transport.

“Sophisticated interconnectivity is one of the fundamental building blocks of next-generation smart city development,” said Joe Appleton, a smart city’s strategist at bee smart city. “Citizens and governments will be connected in ways that we’ve never seen before. IoT will deliver huge opportunities and benefits to smart cities, but this level of interconnectivity will also bring its own set of challenges.”

In a recent post by the Forbes Technology Council, which is composed of 13 members of the industry, they discussed several new smart city technologies that could vastly improve urban areas.

Some of these, such as self-driving vehicles and last-mile delivery automation, are still in the realm of development, although people in San Francisco can take free rides in Cruise Automation and Waymo vehicles at certain times, and in certain areas. There are trials happening for delivery automation as well, in San Francisco and Milton Keynes, UK.

Others are already being used by many cities, including alternative transportation in the form of electric vehicles for hire, e-bikes and e-scooters. This has become a valuable alternative for the millions in cities who cannot afford or do not want to own a car.

For the many more millions that still drive, smart traffic system management is being proposed as a way to reduce the number of deaths on the road, by combining traffic and emergency systems together to improve response time.

What carries this all across is 5G being blanketed across major cities, which is said to enable all of this real-time collection of data. However, city leaders need to be aware of the potential for collecting too much data, or doing little with the analytics tools available.

As is the case in many industry, without a data-first approach, all of the data collected may be utilized in the wrong way, if at all. City leaders are also under pressure to fulfill the needs of their citizens, even if the data suggests that there could be improvements.