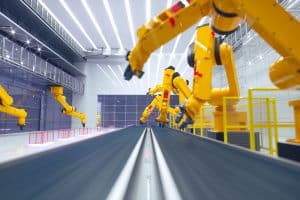 The study found that when it comes to smart factories, the auto industry is more bullish than its peers in manufacturing.

The auto industry appears to be stepping on the accelerator when it comes to developing smart, connected factories. The speed of this transformation depends on how quickly key digital technologies can advance.

These are the key takeaways in Capgemini’s latest Smart Factories in Automotive study, a follow up to last year’s research which tracked the deployment of smart factories by automotive OEMs and suppliers.

The latest study, written by Markus Winkler and Dr. Rainer Mehl, found that the auto industry is more “bullish” than the rest of its peers in manufacturing. The industry plans to increase investment in smart factories by 60% over the next three years, with the goal of making close to half of its factories (44%) highly connected. By contrast, consumer product manufacturers hope to achieve 37% smart factory coverage by that time, and discrete manufacturers are targeting 41%.

Currently, about 30% of auto manufacturing facilities can be considered smart factories. This will potentially adding $167 billion in productivity gains, Winkler and Mehl predict. They identify three key digital technologies that are enabling the smart factory:

In addition, almost half (48%) of executives believe they’re making better progress on their smart factory roadmap, versus 38% of those surveyed in 2018, however, only one in 10 auto firms are currently reaping significant benefits from these smart factories.

Winkler and Mehl say a confluence of technology initiatives are needed to make this all possible:

IT–OT convergence: Information and operational technology and teams are integral to the success of smart factories. “End-to-end digital continuity, from design to operations, is only possible when all systems can be connected and speak to each other in a common language,” they explain. “This is why IT– OT convergence is such a critical aspect of achieving scale with smart factories.” At the same time, only 37% of organizations in the Capgemini survey said that they had “set up a new governance model to ensure that IT and OT work in synchronization. In addition, only around a third (34%) said they had a complete view of the data flows across all processes and all IT–OT systems.”

Industrial IoT keeps growing: These hyper-networking technologies are gaining prominence, the study finds. “While there are considerable challenges in scaling IIoT solutions – with only one in five auto firms saying IIoT is scalable – around a third agreed that it holds significant benefit potential.”

Mercedes-Benz is one of the industry leaders when it comes to smart factories, Winkler and Mehl relate. The company has advanced digital-twin technology that can “virtually simulate its production process, right from the press plant to final assembly,” they explain. “To illustrate the scale of this, around 4,000 individual processes are examined for assembly alone, before production begins.”

Mercedes-Benz is also building what it calls “Factory 56” — a new smart factory that will be used to produce luxury, hybrid, pure electric, and self-driving cars. The factory also employs advanced data analytics to create self-learning and self-optimizing production systems, Winkler and Mehl add. “For example, its cylinder head production system captures and evaluates 600 parameters that influence quality, which has helped to reduce the rejection rate by a factor of 4.14.”

Taking the assembly line concept to the next level, the new Mercedes-Benz factory also employs “TecLines,” in which “driverless transport systems move build-in-programs from section to section,” Winkler and Mehl explain. “Quick reaction time is achieved by early detection of inconsistencies in the supply chain, using tracking and tracing.” In addition, the factory makes full use of IoT, based on a 5G mobile network now being tested.