Home / News / IBM On Board for Mayflower Autonomous Ship Project 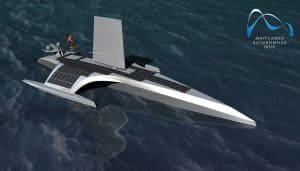 IBM and a global consortium of partners including marine research organization ProMare have collaborated to build an unmanned, autonomous ship that will celebrate the 400th anniversary of the Mayflower voyage by retracing its trek across the Atlantic in September 2020. IBM servers, AI, cloud, and edge technologies will play key roles in running the ship and guiding it to avoid ocean dangers as it sails from Plymouth, England to Plymouth, MA.

If the voyage is successful, it will be among the world’s first full-sized, self-navigating vessels to cross the Atlantic and usher in an era of autonomous research ships. The ship will carry three research pods contacting sensors and scientific instruments that will be used to gather data in a variety of critical areas including sea level mapping, ocean plastics measurement, marine life monitoring, and maritime security. The University of Plymouth, UK will supervise the research with support from ProMare and IBM.

“Putting a research ship to sea can cost tens of thousands of dollars or pounds a day and is limited by how much time people can spend onboard – a prohibitive factor for many of today’s marine scientific missions,” says Brett Phaneuf, a Founding Board Member of ProMare. Phaneuf, who Co-Directs of the Mayflower Autonomous Ship project with fellow Board Member Fredrik Soreide, says, “With this project, we are pioneering a cost-effective and flexible platform for gathering data that will help safeguard the health of the ocean and the industries it supports.”

Andy Stanford-Clark says: “IBM helped put a man on the moon and is excited by the challenge of using advanced technologies to cross and research our deepest oceans.” The Chief Technology Officer, IBM UK & Ireland says, “By providing the brains for the Mayflower Autonomous Ship, we push the boundaries of science and autonomous technologies to address critical environmental issues.”

The University of Birmingham will play a key role, overseeing the virtual, augmented and mixed reality technologies. The voyage will use this technology, which includes a Mixed Reality Telepresence Science Station, to broadcast bring the voyage to schoolchildren and the public.

MAS will use IBM’s PowerAI Vision Technology and IBM Power Systems accelerated servers to help ProMare build deep learning models that can recognize navigation hazards spotted by the ship’s video cameras. Researchers will use real data and images from the Plymouth Sound to train the models. Ideally, the ship will recognize hazards like debris, buoys and other ships. The MAS will have constant situational awareness via the same RADAR, AIS (Automated Identification Systems) and LIDAR technology found in autonomous cars.

When the technology detects a hazard, IBM’s Operational Decision Manager software will help the ship choose how to respond — by speeding up, changing course, or using emergency power. The models will use data from maps, sensors and weather forecasts to chart the best course and speed for the journey.

Dr. Richard Thompson, OBE, Director of the Marine Institute, University of Plymouth says, “Microplastics present a substantial challenge to our oceans. Over 700 species come into contact with marine litter which is found from the poles to the equator. Some estimate that the quantity of plastic in the oceans will triple in the decade to 2025. The Mayflower Autonomous Ship gives us the opportunity to rethink how to collect data and further our understanding of this global issue.”

The university — a leading authority on micro-plastics, one of our oceans’ most serious threats — hopes to learn more from MAS’s journey. The ship will analyze water samples as it travels across the Atlantic to help them understand the impact and distribution of microplastics in the ocean.

Edge devices will collect, analyze, and store data, uploading it to onshore edge nodes when it can connect. Project leaders will also push updates to the ship’s deep learning models as needed.

The hull is currently under construction in Poland and will make its way to the UK later this year.