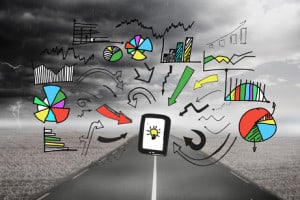 Just like the cloud, fog computing is expected to open new business models. But what is it?

It’s still the early days for the Internet of Things, and many people assume it is being structured like a mechanical flower, with devices and sensors feeding data into central hubs that run sophisticated analytics and algorithms in a back room.

The IoT may not look that way at all.

Rather, the IoT may more likely be supported by “fog computing,” in which computing, storage, control and networking power may exist anywhere along the architecture, either in data centers, the cloud, edge devices such as gateways or routers, edge equipment itself such as a machine, or in sensors.

Traditional networks, which feed data from devices or transactions to a central storage hub—the old “data warehouse” model—can’t keep up with the data volume and velocity created by IoT devices. Nor can the data warehouse model meet the low latency response times that users demand.

The cloud was supposed to be an answer. But sending the data to the cloud for analysis also poses a risk of data bottlenecks, as well as security concerns. New business models, however, need data analytics in a minute or less (with some use cases of even less than a second). The problem of data congestion will only get worse as IoT applications and devices continue to proliferate.

What Is Fog Computing?

Fog computing – a term originally coined by Cisco—is in many ways synonymous with edge computing. In contrast to the cloud, fog platforms have been described as dense computational architectures at the network’s edge. Characteristics of such platforms reportedly include low latency, location awareness and use of wireless access. Benefits include real-time analytics and improved security.

While edge computing or edge analytics may exclusively refer to performing analytics at devices that are on, or close to, the network’s edge, a fog computing architecture would perform analytics on anything from the network center to the edge.

One use case for fog computing is a smart traffic light system, which can change its signals based on surveillance of incoming traffic to prevent accidents or reduce congestion. Data could also be sent to the cloud for longer-term analytics.

Other cases described by Cisco might include rail safety; power restoration from a smart grid network; and cybersecurity. PrismTech Vortex cites use cases with connected cars (for vehicle-to-vehicle and vehicle-to-cloud communication); and in smart city applications, such as intelligent lighting and smart parking meters. In the figure below, Cisco shows what kinds of analytics could be performed along a fog network:

The exact definition of fog computing, however, is still being molded. Recently a new industry group, The OpenFog Consortium, was formed to define and promote fog computing. The consortium, founded by ARM, Cisco, Dell, Intel, Microsoft and Princeton University in November 2015, seeks to create an architecture and approach to fog, edge, and distributed computing. Through a series of working groups, the consortium is developing an OpenFog architecture, addressing security issues, and planning industry testbeds.

Consortium membership is open to all organizations and individuals with an interest in planning and developing the architecture to support the next generation of IoT.

“We hope to have membership grow with a diverse set of members from technology suppliers, academia as well as technology users — ISPs, auto companies, robotics,” says Helder Antunes, chairman of the OpenFog Consortium and senior director of Cisco’s Corporate Strategic Innovation Group. “This will provide an environment where the different perspectives and requirements will foster innovation and wide interoperability within the industry. In addition, we hope to see fog computing become synonymous with a wider adaptation of IoT use cases.”

The OpenFog Consortium seeks to build an industry-wide coalition, as many fog computing initiatives will span many vendors and technology platforms. Microsoft, one of the founding corporate members, joined the consortium in November 2015 “with the goal of accelerating the delivery of core technologies needed to fully realize the potential of fog computing,” says Matt Vasey, director of IoT business development at Microsoft and also VP of business development and treasurer of the OpenFog Consortium. “We are working with industry leaders to foster development of technology that supports IoT scenarios requiring intelligence at or near the edge of the network.”

Cisco will be participating in a testbed project, Antunes says. “We have already supplied numerous example fog use cases from several vertical markets, and these are helping to drive requirements for the OpenFog Reference Architecture.” Cisco intends to “work with universities and test bureaus to create OpenFog test laboratories,” as well as “submit Cisco products for OpenFog certification testing.”

The consortium’s ultimate measure of success will be creation of a thriving ecosystem of developers who build solutions to the OpenFog computing model. This means plenty of evangelization and communication work ahead, Antunes suggests.

“We have had discussions with a broad range of companies, including both established industry leaders and startups, who develop software, hardware, and applications related to fog,” he says. “A number of these companies have already joined OpenFog, and more will soon.”

Eventually, many of today’s cloud developers may become part of the ecosystem, as “fog computing is actually the continuum of cloud towards the edge of the network,” he adds, noting that the consortium is in a position to “stimulate an open, vibrant applications development ecosystem, not unlike the iTunes app store.”

The consortium will also encourage the creation of open APIs at several levels of the fog software stack, and SDKs to assist developers in production of software packages, Antunes says. “Developers of software can sell it in an online marketplace to a large customer base of fog users.”

While adding fog computing to an IoT network would seem to add complexity, that complexity is sometimes necessary. In certain use cases, fog computing solves the inadequacies of cloud-only models, which have serious challenges with latency, network bandwidth, geographic focus, reliability and security.

Any additional complexity “is sometimes necessary to help enable the functions of essential IoT applications,” Antunes says. “One study found that 40 percent of IoT traffic will pass through edge computing devices or fog nodes. OpenFog is taking steps to manage the incremental capacity increase in networks due to fog, by creating common hardware and software platforms, and very sophisticated orchestration, management, configuration, and network analytics capabilities to largely automate the operation of fog networks.”

He adds that he believes “the addition of fog to IoT networks will so greatly increase their capabilities and revenue potential that the purchase and installation of the fog network will have a very short payback time.”

OpenFog and IoT configurations as they exist today may be highly compatible as well as fog develops. “Dumb devices can remain dumb, but can feed data to centralized or regionalized fog applications that are close to them and therefore can meet the requirements that cannot be met by faraway centralized applications,” says Antunes. “In fact, fog will help more devices to be dumb or even dumber than they are today.” He also notes that “in some cases, by aggregating at the fog level, you may actually save money by using dumber sensors and in essence offload those capabilities to the fog nodes.”

Antunes sees a number of new growth areas or even industries coming out of this initiative. “One very exciting potential is Fog-as-a-Service – FaaS — where a fog service provider, which could be a municipality, telecom network operator, or webscale company, deploys a network of fog nodes to blanket a regional service area,” he explains.

Just as cloud has created new business models, growth and industries, “fog can eventually do the same,” says Antunes, who foresees the “excitement of having new vendors, new industries, new businesses models come out of this as the industry, working together with academia to address the challenges and solve real business problems with these new architectural approaches.”

Fog computing “will provide ample opportunities for creating new applications and services that cannot be easily supported by the current host-based and cloud-based application platforms,” Antunes continues. “For example, new fog-based security services will be able to help address many challenges we are facing in helping to secure the Internet of Things.”

Five use cases for edge computing