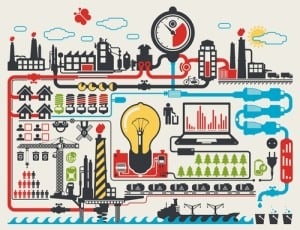 IIoT applications often need scalability and flexibility. It may not need to be a choice between fog and edge computing; enterprise may need both.

With the rise of the Industrial Internet of Things (IIoT), new technologies are being introduced daily to deal with the influx of data being produced. Differentiating between these new technologies can be a challenge for enterprise and industrial companies alike. The terms edge computing and fog computing, for example, are often used interchangeably as they both involve pushing intelligence and processing capabilities closer to where they originate. And although there are clear distinctions between how and why to deploy each type of infrastructure, both are critical to a successful IIoT strategy.

To prepare for the future of IIoT, adopting next-generation solutions including edge and fog computing is necessary in order to scale for tomorrow’s connected devices, networks, and applications, from industrial plants and corporate campuses to schools and cities. Here is how organizations can best distinguish between edge and fog, and when to deploy each based on their environments.

Differentiating Between Edge and Fog

Simply put, edge computing is a technology infrastructure that collects, analyzes and stores data on-site at production facilities, saving time and helping to maintain operations instead of relying on the slower system of storing all data in the cloud. Edge networks have already made a significant impact on maintaining uptime and providing near-real-time data and analytics to optimize performance for the IIoT and the future of industrial automation. The industrial enterprise is expanding to smart devices and sensors to provide this data, contributing even more data to keep networks running. While some sectors are still adapting and adjusting to the edge, the next wave of data communication between devices and networks is arriving: fog computing.

Fog is a form of cloud computing that is closer to the edge, so it can handle larger amounts of data without pushing the data out to the cloud. By handling real-time IoT requests between the edge and the data center cloud, fog will improve the capabilities of the edge. While these anticipated benefits make fog computing seem like a no-brainer for companies looking to scale their network with IIoT, it is important to consider if fog is necessary for all levels of operations. So when should you look to implement fog? Outside of current industrial automation and edge networks, fog will become an integral component of larger connected systems, sharing data between thousands or millions of connected devices.

For companies whose infrastructure is more insular and individualized, fog deployment may not be necessary. This level of integration may be years off, but understanding and implementing both edge and fog computing are important to a successful IIoT strategy.

Deploying for IIoT: Where to Start?

Understanding the different applications and scalability for edge and fog makes it easier to determine which is the best fit for your environment. This is especially true as both options are equipped for the next generation of IIoT capabilities and are an important step in preparing for large-scale integration in the future. In industrial settings, edge networks are sufficient to service the data and analytics needs of multiple facilities in a system. But for industries preparing to scale greatly, fog may be a better option to implement for long-term growth and success.

Appling edge computing can be the next step toward IIoT integration that will prepare facilities for the future of automation. The need to optimize efficiency, productivity and quality are pushing manufacturers to move their intelligence out to the edge of the network to process data faster and respond to competitive pressure. This system is valuable for facilities with many outposts, like hundreds of oil drilling rigs that all feed into a central data center. Installing edge servers on the oil rigs allows them to share data faster and process it closer to the edge of the network rather than sending the data to the cloud for processing, which could potentially delay alerts about system performance or abnormalities.

See also: What is the role of standards, big data, and analytics in manufacturing?

Moving beyond contained networks and systems, we will start to see fog computing enabling more of the future of connected devices and embrace the potential of IIoT. Fog is closer to the edge, which means it can handle real-time IoT processing requests faster and reduce latency in sharing data between networks. Outside of industrial networks, fog computing can help different industries and sectors scale to connect thousands or millions of edge devices.

One example is the evolution of autonomous cars. Fogs along the smart network will allow driverless cars to communicate instantaneously on highways and when crossing busy intersections, processing computing demands in real time for speed, efficiency, and safety. As the autonomous vehicle industry grows and finds mainstream applications, fog will be vital for sharing data between thousands of cars and trucks.

The Next Generation of Edge Architecture

What will these networks of millions of devices supported by edge and fog look like? While the cities of the future are still hard to imagine, laying the foundation now is the best way to prepare for further automation and expanded networks that will cover larger distances but communicate even faster. Fog will fill the gaps between the edge, and enable instant communications between a network of devices in an ecosystem. This new level of orchestration will be necessary for future infrastructure, connecting smart devices like traffic lights, crosswalks, and driverless cars.

Smart cities will encompass far more than devices – they will connect utilities like power and water to conserve energy from smart grids, manage water distribution, and control energy demand at peak times of the day. Fog is the connection between all of these systems to communicate their needs, coordinating these unrelated devices and networks to analyze the appropriate action. By preparing for the next generation of edge architecture now, industries and cities can analyze and embrace the potential of fog computing. As the capabilities of IIoT grow, more networks will be connected and scale up to service our everyday needs, creating an even greater network of smart homes, buildings, and cities.

Jason Andersen is Vice President of Business Line Management and is responsible for setting the product roadmaps and go to market strategies for Stratus Products and Services. Jason has a deep understanding of both on-premise and cloud based infrastructure for the Industrial Internet of Things (IIoT) and has been responsible for the successful market delivery of products and services for almost 20 years. Prior to joining Stratus in 2013, Jason was Director of Product Line Management at Red Hat. In this role, he was responsible for the go to market strategy, product introductions, and launches, as well as product marketing for the JBoss Application Products. He also previously held Product Management positions at Red Hat and IBM Software Group.