Home / Tools and Tactics / Blockchain / How’s the Bacon? Blockchain Hopes to Find Out 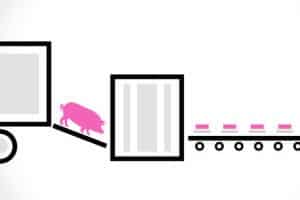 Blockchain in supply chain: Walmart and IBM are using blockchain to track pork in China, but the effort will need to scale to realize business value.

Back in September, Jerry Cuomo, IBM’s VP of blockchain, told Yahoo Finance that 2016 “started with blockchain tourism running rampant.” Companies were spending time and money experimenting with blockchain technology, not actually following through with implementations that can make meaningful change for both internal business processes and in dealing with supply chain partners.

Part of the reason for all the tourism might be because, according to Citigroup, blockchain is one of the many technologies that could use computers to replace human workers. It’s not unlike the way automation has reduced the number of manufacturing jobs in the U.S.

Despite all the “tourism,” IBM is still making inroads in a number of industries, such as Thai banking. Now, Walmart and IBM are working with Tsinghua University to put the public ledger technology toward improving how food is tracked, transported, and sold in China.

China’s food supply chain has seen major blemishes in recent years, between the 2008 scandal involving infant formula containing the dangerous chemical melamine, and the 2013 situation where a crackdown on illegal processing of dead pork meat resulted in  farmers dumping 16,000 dead pigs into a river. It’s not surprising to see that Walmart wants to ensure they sell safe products to their Chinese customers as the company continues to expand and target the country’s growing middle class.

Scientists from IBM Research in China are working with authentication technology experts from Tsinghua University and Walmart’s supply chain leaders to create what IBM is calling a “new model for food traceability, supply chain transparency and auditability.”

Bridget van Kralingen, the senior vice president of industry platforms at IBM, said in a statement, “Advanced technology has reached into so many aspects of modern life but it has lagged in food traceability, and in particular in creating more secure food supply chains. Our collaboration with Walmart and Tsinghua University is a step of global significance to change that.”

The rise of ‘BaaS’

Walmart’s implementation of blockchain is being built using IBM Blockchain technology, which in turn uses the open-source Hyperledger Project fabric from the Linux Foundation. IBM’s offering one of many in the growing blockchain as a service (BaaS) space, which offers private blockchains accessible to only a company or its partners. Because the infrastructure necessary to run a private blockchain is rather massive, companies are reaching out to BaaS offerings.

The ideal BaaS supply chain in China would work as follows:

Every single food product is given space within the public ledger to store information about which farm the product originated from, details about which facility processed it, potential expiration dates, storage temperatures, and details about the shipping process. By incorporating IoT technology to both enter and read this information at multiple points along the supply chain, the blockchain becomes a single source for all this information. Walmart would, ideally, work with IBM and scientists at Tsinghua University to develop strategies for discovering potential safety issues, such as a period of time in which the product was not refrigerated to the correct temperature.

Walmart’s new implementation would have to scale. According to an interview with CoinDesk, IBM’s head of global supply chain solutions, Paul Chang, said that the pilot project would run on three nodes: one managed by IBM, one managed by Walmart, and one managed by a supplier that didn’t want to be disclosed. Chang suggested that the project will need to scale to 10 nodes in order to save “billions of dollars.”

Rolling out those new nodes will be difficult at best. The company will need to get buy-in from the farmers, butchers, processors, and shipping companies that make up the Chinese food supply chain. It would seem that if there is any company that can use its financial might to nudge its partners toward blockchain compliance, it’s Walmart, but only time will tell.

IBM’s offering one of many in the growing blockchain as a service (BaaS) space, which also includes Microsoft’s Azure platform and Rubix, built by Deloitte. Microsoft has announced its own Project Bletchley fabric to compete against Hyperledger.