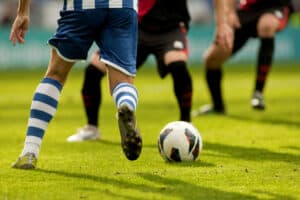 The real-time data “provides a level of understanding commentators and fans could previously only speculate about, like the probability of making an attempted shot, the pass strength of a given team, and even which players are pressured the most often.

Real-time information delivery has been a part of the sports scene for some time — with scores posted as they are made, and data about player averages updated as soon as they hit a goal, slide into a base, or make a basket. Now, AI and machine learning is adding a whole new dimension to real-time insights into games.

Amazon Web Services, whose machine learning technology has been applied to deliver real-time analysis on European football (soccer) matches. In an AWS report in Forbes, ​​Germany’s premier national football league is employing AI and machine learning — backed up by analytics, compute, database, and storage services in the cloud — to provide in-depth, real-time strategic insights on games to its remote fans.

The real-time service provides information on “what plays led to victory, which players made the biggest impact, and how that yellow card from the first half affected the outcome.” Millions of global soccer fans can now access activities within the league, AWS says.

The football league turned to AI and machine learning-driven insights for fans during the Covid crisis, when fans were forced to watch their favorite teams online, versus actually attending games in person. The league already boasted more than 500 million fans around the world. “The league knew its fan base had an appetite for richer content that would bring them closer to the pitch,” according to AWS.

A single match produces approximately 3.6 million unique events, AWS reports. “The ability to analyze these data points and relay insights can enrich storytelling in soccer, helping fans better understand how strategy, skill, and luck impact the game.” Fans seek information “about the performance of their favorite players and teams, like how fast they are, what tactics they’re using, and the quality of playing,” relates Simon Rolfes, sporting director of the Bundesliga club Bayer 04 Leverkusen.

AWS’ ongoing development of deep-learning technology has made the real-time match analysis possible. “Deep learning, a subset of machine learning, imitates the way our brains learn by processing data with artificial neural networks that can extract complicated relationships with little human supervision.”

See also: Real-Time Sports Analytics Engages Fans at Home and in the Park

The league now offers real-time data-driven insights about team and player performance in every game, based on a combination of advanced statistics and game analyses “that provides new insights into the action on the field” — based on split-second decisions.

Each stadium in the league is equipped with about 20 position-tracking cameras. “Deep learning-powered computer vision tracks player and ball movement and other events at a 25 Hz frame rate, and translates them into position data, event data, and metadata,” AWS says. Each data point “is calculated and distributed within 500 milliseconds—about 20 to 40 times faster than the time it takes for live video footage to reach the screen.”

The real-time data “provides a level of understanding commentators and fans could previously only speculate about, like the probability of making an attempted shot, the pass strength of a given team, and even which players are pressured the most often,” according to AWS. The league also has developed algorithms that delivers real-time analysis to broadcast commentators.