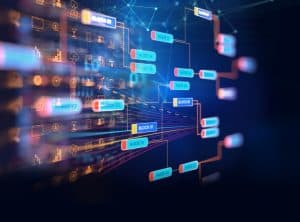 Watch for distributed ledger technologies like blockchain and similar platforms to become more widespread, even as the cryptocurrency hype dies down.

Now that stratospheric cryptocurrency valuations have returned to earth, impressive developments in the use of crypto’s underlying technology for non-coin-related applications may finally begin to draw appropriate attention.

Blockchains and distributed ledger platforms show potential for addressing many of the particular problems plaguing modern information technology (IT). As business has become increasingly digitized and data-driven, it has also grown increasingly subject to cyber threats, rising information storage and exchange costs, and overall process balkanization.

Getting yesterday’s enterprise IT infrastructure to seamlessly support today’s highly dispersed and highly automated business models is next to impossible. Blockchain technology integration may provide some relief in the form of cryptographically secure, peer-to-peer networks for decentralized data management and distributed systems of record.

When it comes to permissioned or consortium blockchains, any business area that can benefit from the relatively secure sharing of data across a network of participants with no central “owner” could be greatly disrupted by distributed ledger technology.

Traditional business-to-business (B2B) contractual models familiar to many organizations may soon be transformed by blockchain’s ability to facilitate “smart contracts,” which automate transaction flows to improve overall information delivery and interaction. This shift could apply to many industries, including healthcare, finance, transportation/logistics, and supply chain — but also to areas such as digital rights management, travel and leisure, advertising, and the internet of things (IoT).  Applicability is still being investigated, and organizations in many areas are still learning, which is also why some enterprise use cases are not well-suited to blockchain.

See also: Blockchain-as-a-service — a solution looking for a problem?

Generally, there is still confusion and an overall lack of understanding of blockchain in the general population — it isn’t a “thing,” it’s a model for creating a distributed database. It can be difficult to grasp conceptually (especially for people without an IT background), and from a business standpoint, the full benefits of blockchain have not yet been fully recognized.

This is starting to change as a business experiment with more and more non-crypto solutions built using blockchain. To support this evolution, I believe we will also see the technology rapidly evolve and grow in areas such as performance and scalability (weaknesses of many existing technologies today). IoT as a source of information for blockchain implementation will undoubtedly become more prevalent in the near future (along with the associated concerns around security and accuracy of data), as will the concept of micropayments (small, automated payments outside of today’s popular public blockchain networks).

For or consortium blockchain deployments, we will likely also see more attention paid to integration (the ability to get data into and out of a blockchain) — analytics and APIs will get more attention as organizations realize that the best blockchain implementation in the world will not be successful if it doesn’t fit into existing enterprise architectures and applications.

IoT as a blockchain enabler

Many of the current conversations around the use of distributed ledger technologies for specific business problems will typically touch on the topic of governance and stewardship, as well as the need to determine what is done “on-chain” versus what is done “off-chain.”

For example, consider the debates around the ownership of a private/permissioned blockchain network: If you have a central authority managing/running the network, does that negate one of the oft-listed benefits of blockchain (no third-party intermediaries)? And what about privacy: In many blockchain stacks, information is not encrypted and is available to everyone (which can obviously be a business issue). I’ve also heard of use cases that called for storing large amounts of data on the blockchain, which (in many blockchain stacks) is not recommended.

These stories will continue to evolve as various industries and enterprises engage in more distributed database experiments and introduce new blockchain-based solutions. This is the process by which new distributed ledger technologies mature, and blockchain is well on its way through that evolution.

As the global Chief Technology Officer (CTO) at TIBCO, Nelson Petracek is helping to shape the development of TIBCO's emerging technology platforms and products. With over 20 years of experience, Nelson works to deliver solutions for the next stage of digital business, drawing upon his deep knowledge of cloud, blockchain, low-code applications, microservices, and event processing. A strong technology evangelist, he works with customers to identify and define the appropriate use of various technologies and architectures, and advises on best practices and information delivery patterns. Nelson received his Bachelor of Commerce in Computational Science from the University of Saskatchewan.