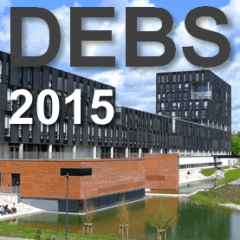 The ACM International Conference on Distributed Event-Based Systems (DEBS) conference is an annual meeting of the academic communities that deal with all aspects of event-based systems. According to its website, the objectives of the DEBS conference are “to provide a forum dedicated to the dissemination of original research, the discussion of practical insights, and the reporting of experiences relevant to event-based computing that were previously scattered across several scientific and professional communities.”

The DEBS conference also aims at “providing a forum for academia and industry to exchange ideas, for example, through industry papers and demo papers.”

This year, the research sessions were divided into four subject areas: Event Processing, Stream Processing, Pub/Sub, and Systems & Frameworks. In addition to these, there were two industrial sessions, a demo and poster session, three keynote speeches, three tutorials, and the “DEBS Grand Challenge.”

Out of the keynote speeches at DEBS 2015, the one that was most interesting to me was entitled “Fast Data,” and was given by Richard Tibbetts, cofounder of StreamBase Systems, which was acquired by TIBCO Software, Inc. Tibbetts recently left TIBCO to try out on his own.

Some of Tibbetts’ observations were about the human factor that serves as an obstacle to the development of fast data systems. While the technology enables us to use “fast data” in order to make autonomous decisions and actions in real-time, people fear fast systems that can do things that are beyond their understanding—and people fear autonomous systems in general. Tibbetts indicated that the ability of people to control such systems is a critical success factor. He also talked about Microservices as an architectural way to design such systems.

The second keynote speech was given by Dr. Divyakant Agrawal, Director of Research of Data Analytics at the Qatar Computing Research Institute and Professor of Computer Science at the University of California at Santa Barbara.

The third and final keynote speech was given by Bjørn Olstad, Corporate Vice President at Microsoft, Norway. Both Agrawal and Olstad talked about various aspects of Big Data. Agrawal discussed more about the system aspect while Olstad discussed Microsoft’s solutions based on Office Graph, a framework and platform that provides data based on user identity and user activity.

There were also three tutorials. I gave one entitled, “When Artificial Intelligence meets the Internet of Things.” The second tutorial was entitled, “Tackling Variety in Event-based Systems” and was given by Souleiman Hasan, PhD Researcher, and Edward Curry, Research Scientist, both of the Insight Centre for Data Analytics at NUI Galway.

The third tutorial was entitled, “Patterns for Real-time Streaming Analytics” and was given by Srinath Perera, Vice President of Research, and Sriskandarajah Suhothayan, Technical Lead, both of WS02, Inc.

The new research directions that were present in the DEBS conference dealt with new methods of verification and validation of event-based systems, and some system issues in implementing event processing systems such as lazy evaluation or dealing with out-of-order events.

An interesting part of the conference was the DEBS Grand Challenge that I had introduced while I was general chair of DEBS in 2011. The DEBS Grand Challenge is now in its fifth year. This year, the Grand Challenge consisted of data about taxi drives in NYC. The challenge was in calculating the most traveled routes and the most profitable areas. In essence, both are using the Top-K operator (finding the top K items based on a certain comparison criterion).

Overall, the research community in the event-based systems area was the one that created the event processing and stream processing disciplines. Many of the products are spin-offs of academic projects. It is interesting to follow the next generation of research in this area. Next year, the DEBS conference goes to Irvine, California. The idea is to include dialogues with other communities and extend the conference’s scope.