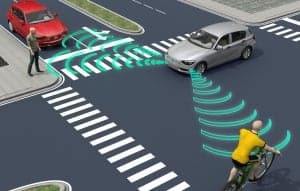 Smart systems powered by 5G and edge technologies have the potential to improve safety on the roads and in industrial facilities. Jillian Kaplan of Dell Technologies has a strong personal interest in developing such technology for good.

Many people and institutions talk about using technology for good. But few have the personal connection to the topic and the drive for change that Jillian Kaplan, 5G and Telecom Thought Leadership Lead at Dell Technologies, brings to the table. With a long career in telecom, she became focused on how technologies like autonomous vehicles and manufacturing systems enabled by 5G could reduce deaths and injuries from distracted driving and other accidents.

RTInsights recently sat down with her to discuss her personal story, areas where technology can help improve safety, and how Dell Technologies is helping telecom companies and their partners deploy 5G and enable a next-generation of smarter, safer systems. Here is a summary of our conversation.

RTInsights: Could you tell us about your background in tech, the story that you’ve been sharing about your accident, and how that’s driving some of the things that you’re looking to do with technology?

Kaplan: I’ve been in the telecom space my entire career, 17 and a half years. I’ve always understood the power of a network because I’ve been doing this a long time. And about five years ago, I had a crash that made me refocus my work to looking for ways to use technology for good.

On a hot day in August 2016, I went for a walk in early in the morning because it was going to get hotter. We had adopted a new puppy, and I was taking her out. I was crossing a main road on the way back to my house, the person who was closest to me stopped for me.

I was in a marked crosswalk. It was a bright, clear sunny day, no rain, not a cloud in the sky. I don’t remember anything, but bystanders say that I was turned, thanking the stopped car.

I got hit by a car traveling the other direction at about 40 miles an hour. The driver was distracted. The person was using sign language to talk to the car’s passenger. So, their hands were off the steering wheel, and they were not looking at the road. That’s a pretty significant distraction.

An ambulance was called. I had to go to a level one trauma center. I live about 20 minutes west of Boston. They couldn’t get me into the city because rush hour traffic was so bad. Instead, they took me to a center in Worcester. I had emergency brain surgery because I was going to die. And then I had a couple of pelvic surgeries to piece my body back together because my pelvis was crushed into itself.

The crash prompted me to look at technology as a solution. Going through the trauma and living through the aftermath, I wanted to know what I could do to prevent this from happening to other people. I wrote stories and appeared on many news shows. I was part of the crew that passed a hands-free bill here in Massachusetts in November 2019. [The bill has since become the Hands-Free Law.] So, you can no longer hold your phone and drive because the phone is obviously a significant distraction.

More and more states are passing legislation around distracted driving. We were hoping that we would see a reduction in crashes and distractions. And quite simply, we’re not. Crash fatalities this year are up over 18% from 2020. The bills and laws are just not helping change behaviors.

RTInsights: What types of technology are needed to help?

Kaplan: We are starting to see more attention being paid to technology solutions. We’re talking about things like smarter cities that can track pedestrians and traffic or track where cars are going and understand how these crashes are occurring.

There is growing interest in autonomous vehicles. You obviously not only going to need AI and ML and all the technology in the car but a 5G network and its low latency and high speeds.

As a victim of a crash, I really wasn’t sure whether I should believe that autonomy or technology is the answer. I went through an internal debate on if this made sense for me after what I had been through. I started to look at autonomy in other industries because, especially in vehicles, we really only hear about the autonomous car that malfunctions and kills someone. We don’t hear about the car that saved someone because the driver wasn’t paying attention, and the car stopped on its own for someone in a crosswalk. Or a car that stopped when a child darted out from across the street. We never hear those stories. We only hear about an autonomous car that malfunctioned and killed someone.

And just to be clear, I obviously think that technology misfires should be zero. But I started to look at manufacturing because they’ve been working in autonomy for a long time. They have a lot of their operations done by machines. When you look at deaths in manufacturing environments caused by human error compared to robot-related deaths, it is about 4500 to 27. That’s about 0.5% of the deaths caused by human error. Again, those 27 deaths should be down to zero. But it shows the promise of technology in reducing incidents.

If we can figure out how to bring that same level to vehicle crashes, that would make a significant impact. Nine people are killed every single day in the U.S. alone as a result of distracted driving. And those who are not killed must deal with extensive health problems.

I think one in ten people survive crashes like I had. I remember when I testified at the statehouse numerous times when we were trying to pass this bill, I was the only living victim. It was usually people who had family members killed or who had killed someone themselves. And I don’t know a single person that’s gone back to what I call life before the crash. I don’t even like limp, but I have a brain injury. I don’t remember anything. I have stacks of notes around me because I never remember what I’m supposed to be doing.

This is why I am so interested in applying technology to the distracted driver and other problems, such as drunk driving. Raising awareness about the issue and passing laws can only do so much.

RTInsights: Where does 5G come in?

Kaplan: There’s a lot of physical technology that goes into cars into machines. But I think that the piece that we often forget about is the network. I am focusing on the telecom space to figure out how do we enable these technologies with a suitable network.

5G is going to enable many of the applications that will help with distracted driving, robotic safety, and other use cases. It offers extremely low latency and extremely high speeds. You can build it out, especially in a manufacturing environment, like a private network that is safe and secure.

We’ve seen 5G already, not so much in life-saving capabilities, but in connected sports venues where a venue will build out a physical private network to have their fans be more connected in the experience. We can do the same thing in hospitals. And we can do the same thing in manufacturing facilities to make sure that we are able to securely optimize machines and bots to do the work.

It takes the humans out of harm’s way and allows these facilities to reskill people to help the robots work more efficiently. It doesn’t mean that people won’t have jobs. It just means they’re going to have different jobs that don’t put them at risk of being harmed. Dell Technologies is helping to solve this problem too.

Cost savings can be significant. Injuries cost the manufacturing industry more than $7.62 billion in 2019. If manufacturers can automate operations, they might reduce those costs by 20% to 40%. That’s a lot of money. And that’s what is appealing to the companies. But I think we’re amiss when we don’t mention how much safer it can make these operations and how it can really benefit people.

And the same with cars. We talk a lot about the coolness factor of having your car drive itself. But we don’t talk enough about how many lives can be saved and injuries prevented. Obviously, I’m super passionate about this, but I never hear technologists talk about these statistics.

RTInsights: How does Dell Technologies help?

Kaplan: Dell Technologies has been in the telecom space a long time. For years, we sold servers, storage, data protection, physical PCs, and more into telecoms.

With 5G, we and the industry are pivoting. Previously, telecom was all about you and me and our cell phone. Like how many servers, how much storage, what do you need in order to enable X amount of people on their phones?

But 5G is all about the enterprise. And it’s all about different industries, including healthcare, transportation, smart cities, manufacturing, and more. Our telecom business has gone from selling things into telecom to enable end-users like you and me to partnering with telecoms to build custom solutions. This will allow telecoms to provide the backbone that enables new enterprise use cases that require 5G’s capabilities. We have solutions for the core, edge, RAN [radio access networks], and more.

And we’re very focused on open-RAN, which is going to help reduce costs for telecoms. It helps us partner with other vendors so that our hardware is layered properly with software to make sure that we give a full robust solution to enable what’s needed to be done. And we’re also building out actual software ourselves. We just launched Bare Metal Orchestrator (BMO), which deploys, configures, and manages servers at scale.

We’re building an end-to-end portfolio covering everything from the core to the edge to the RAN and everything in between. We’ve got a suite of hardware and servers that are purpose-built for Telecom edge solutions.

They’re super rugged, and they can withstand not sitting in a data center that’s maintained every single day. That’s what they’re built for. Previously we didn’t have these purpose-built edge servers for telecoms. We had servers that we would use for telecoms, but now we’re physically building hardware for telecom that is NEBS compliant.

That’s been a big shift in our business and really where we’re going. We know the enterprise. We’ve been in the space a very long time. And we’ve worked in all the different verticals. And because of that, we can really help the telecoms monetize the investments they’re making in their 5G networks by understanding these use cases and helping them build solutions that really enable those use cases.

An example is our work in building private mobility solutions for connected venues and remarkable factories. There are longer-term things like autonomous vehicles and remote surgery. They are not going to happen overnight, but you start by building out the network, understanding the capabilities of it, and being able to spread it far and wide.