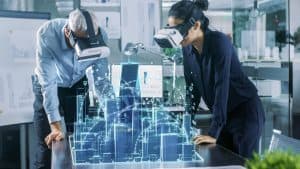 A recent survey finds that more than 80 percent of companies deploying IoT are also deploying augmented reality in parallel.

Think about the vast boosts in productivity that can be seen within workforces — especially frontline workers and technicians — when all they have to do is slip on a headset and explore the intricate parts of machines and systems. Augmented reality (AR) is bringing real-time data to life in ways unimaginable in the days when data was just bits and bytes sitting in databases.

The potential of AR was recently explored by Vladimir Lukic, managing director and partner with BCG, and Craig Melrose, executive vice president of digital transformation solutions for PTC, in a webcast hosted by MIT Sloan Management Review.

“There’s much more data being generated, but data is stuck,” says Lukic. “Even when you migrate it into data lakes, the long processing times and latency before you can do something with it are hindering ability in the field to do something with it.” In addition, he continues, ” data sources are still fairly disjointed, the protocols are always different, and what it results in is that limited information is at the fingertips of the operators in the field. That operator can be a doctor, a farmer, or a person moving parcels and loading up a truck, and anything in between.”

BCG recently completed a survey of 900 companies that found more than 80 percent that are deploying IoT are also deploying AR in parallel. Thirty percent of these efforts are well underway, and the remainder are still in the early pilot stages of AR, Lukic relates. “We were surprised at how much
companies are seeing linkage directly between data generation, and then projecting it into the field. So, it’s happening, and it’s coming pretty fast at us and over the next two to five years. We should see some pretty interesting deployments.”

A connection between digital and physical. The tasks being performed through AR are those that are not fully capable of being automated. “There needs to be a linkage where the execution will happen in a physical way, but having a piece of info or digital interaction would be helpful to make it more effective.”

Tasks need to be human-driven. “We need a human in the equation who is actually executing a specific task.”

Data aggregation is complex. “It’s not just a simple phone call or a simple display of one data point, but actually there are different data sources that need to be amalgamated, and somehow delivered at the moment when they’re needed.”

It’s real-time. “All AR applications are in the moment, and they need to be real-time. You’re in an action for a few seconds, and you need a piece
of information in front of you at that moment.”

There are hidden layers in the equation. “Probably all of us have, at some point, had to go to the instructions on the printer and replace a cartridge or a piece of it, and the little projections that were happening on it that were super annoying,” Lukic quips. “There are a lot of hidden layers when you’re interacting with objects and augmented reality brings a unique ability to help you see beyond just what the eye sees at the front face.”