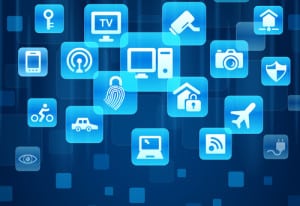 Blockchain has numerous uses and applications in the IoT, but pressing issues remain with security and trust, as well as scalability.

As blockchain unfolds, the convergence with the Internet of Things (IoT) increasingly becomes a compelling value proposition for organizations across many industries.Blockchain, a global, highly distributed ledger or database, provides an online facility for tracking and recording transactions between systems or between people.

We recently caught up with Dinesh Venugopal, head of strategic and digital customers of Mphasis. The company, which specializes in IT services, has been exploring blockchain uses and applications in the IoT.

“Pilots are underway across various industries and we keep hearing new use cases every day,” he observes. “IoT can instill intelligence into existing or new infrastructure that can communicate, report and process certain operations by themselves without human intervention.”

Recently, for example, a blockchain-based microgrid was used to successfully test peer-to-peer energy trading in Brooklyn, New York. “With the help of blockchain, it was feasible to offer P2P trading of energy on the grid,” Venugopal said.

How blockchain works in the IoT

Venugopal illustrated how a blockchain-enabled transaction work across IoT networks.

“An IoT enabled blockchain is where an overlay of services is designed in a particular kind of framework that will enable free communication between devices in a network,” he said. “Each device generates its unique public key to send and receive information with another device and any participating device can seamlessly retrieve information associated with a given key. For instance, multiple industrial IoT blockchain initiatives are being undertaken to automate irrigation by controlling water supply based on feeds from another blockchain that keeps track of crop condition.”

There are numerous advantages to employing blockchain to manage IoT networks or transactions, Venugopal says. These include the following:

Real-time tracking of equipment condition: “Blockchain technology can be used in tracking billions of connected devices to record feeds on working condition,” Venugopal points out.

Immediate failure rectification: “Regular feeds from devices posted on blockchain can immediately identify failure instances and immediate corrective action can be taken,” he illustrates. “For instance, temperature fluctuation in a cold fleet carrying food items identified by sensors gets posted on a fleet provider blockchain and a trigger is sent to the driver of the fleet, food supply company, and fleet provider company notifying about the temperature fluctuation. The driver can then immediately take action to fix the issue.”

Trend analysis: A trend study “can be carried out on devices for diagnostic study and preventive maintenance,” says Venugopal.

Accelerated turnaround times: “Real-time feeds on blockchain and triggering feeds to relevant nodes automatically can accelerate consequent actions,” he points out. “For instance, whenever an insurance provider issues a home insurance policy, a mortgage company gets a feed that the insurance policy has been issued for a particular borrower and can be viewed using a passkey on the insurer’s blockchain. The mortgage company can then view the policy in real time and immediately disburse the loan. The process that would have taken a week’s time is completed in less than a day.”

In one solution that Mphasis developed, “IoT blockchain keeps track of the working condition of all home devices using sensor technology and triggers feeds to relevant stakeholders like the homeowner, service center, mortgage provider, and insurer in the event of device break down.” Each stakeholder will in turn take relevant action and update relevant parties.

For example, the borrower will follow up with the service agency for repairs; the repair center will send a technician to fix the issue and then update its own blockchain with events such as whether the device was fixed and the bill amount. Finally, the mortgage provider will revise the value of the device in question based on feeds from other stakeholders and update its own blockchain.

Venugopal cautions there are security issues that need to be addressed when it comes to IoT. These may include managing unknown or untrusted parties, since blockchain IoT “would largely be dominated by a P2P network of communicating devices that function independently without dependence on a centralized trust center, and where the parties are unknown or untrusted and may sometime be of malicious nature.”

Another issue that needs to be addressed head-on is the complex security mechanisms required for blockchain IoT. “Multiple security layers to be developed for multiple devices that need to be integrated in a blockchain-based IoT network. A single loophole can compromise the security of whole network.”

Scalability is another challenge on the horizon. “According to an estimate, 50 billion devices are yet to come online,” Venugopal says. “Scaling up networks to support billions of devices and keeping the network up and running as data keeps multiplying every day – that’s a challenge.”

Since blockchain is a 360-degree shift from decentralized systems to a permission-based public network, “the whole ecosystem may take considerable time to understand the technology and place trust in it,” Venugopal says.

IoT and blockchain: a gig economy for machines?