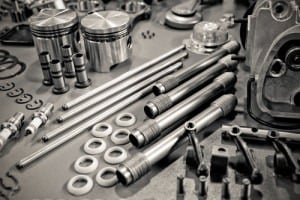 A manufacturer of presses and tools for auto parts production keeps track of its machines in real-time.

Opportunity of Challenge Encountered:  Feintool produces highly customized tools and presses that are used by auto parts manufacturers, a specialty called “fineblanking.” Its presses — which stamp out parts such as clutch parts — can produce 200 items per minute. To accomplish this, Feintool has developed what it calls the “speed tool concept,” in which the part is not cut completely; and a few places are left connected to the strip. It is then transported with the strip, pressed out in the next step and removed from the tool with a conveyor belt, a case study relates. “This ensures that the parts do not land in the tool space and have to be blown or cleared out.”

To guarantee such fast production, Feintool developed innovative rotary and lateral transfer tools designed to integrate as many process steps as possible – for example, deburring and forming – into the tool. Feintool’s  fineblanking experts attend to their customers throughout the entire part development process, including with simulations, 3D-printed sample parts, and prototyping. Customers — the auto parts manufacturers — provide data on the parts they require, and Feintool develops and builds the right tool.

Feintool designs and builds about 50 of its large presses a year, each taking several months to build. “A press producing clutch parts for an automotive manufacturer could produce up to 100 million items a year, working around the clock,” the case study states. “Therefore, maintenance must be carefully planned as there is limited downtime.” As Feintool sought to work closely and iteratively with customers, it needed enhanced connectivity.

Keeping its presses running longer, reducing maintenance costs and getting closer to its best customers were all goals going forward. “We needed to move from a position of reactive, even proactive servicing, but preventative maintenance,” according to Marc Schneeberger, business development manager for Feintool.

The Vodafone IoT service sees a Machinelink 3G device connected to all new Feintool presses. This device is then connected via Vodafone global IoT SIMs; customers can then monitor its presses via Vodafone’s Remote Monitoring and Control Service (RMCS). Feintool can ship presses to anywhere in the world, and activate the connectivity when necessary.

Benefits of this Initiative: The case study notes there are at least 28 Feintool presses online using FEINmonitoring. Most are in Germany and Switzerland, but can be found as far afield as Vietnam, Japan and the U.S. Customers now can check the status of a press overseas right from their offices. The insight generated is making a compelling case for all trial customers to switch to the paid-for service. “For instance, we spotted a regular error with the parts cleaning process on one press. “We responded by changing a bearing on a slider rail, and it has improved uptime by eight minutes a day. Small changes, but over a year this makes for huge productivity gains,” says Schneeberger.

The company offers both condition monitoring and analysis of the collected data in a single solution. “This will have a positive impact on our product development – we learn better from real production environments than lab testing, but the opportunities are bigger than that,” says Schneeberger.