Home / Drones / Walmart Expands Drone Delivery, Will It Catch On? 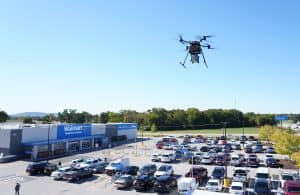 Walmart has expanded its drone delivery trial to seven states, reaching a potential four million customers. But will this ever work commercially?

Walmart recently announced the expansion of its drone delivery network to 34 sites in the U.S., potentially reaching four million households.

Between the hours of 8:00 a.m. and 8:00 p.m., customers near select Walmart’s in Arizona, Arkansas, Florida, Texas, Utah, and Virginia will be able to pay $3.99 to have a drone deliver their order in under 30 minutes.

There are some catches, such as the box must weigh under 10 pounds and the customer must be located within a certain distance of the store.

“After completing hundreds of deliveries within a matter of months across our existing DroneUp hubs, we’ve seen firsthand how drones can offer customers a practical solution for getting certain items, fast,” said David Guggina, Senior Vice President of Innovation and Automation at Walmart. “More importantly, we’ve seen a positive response from our customers that have used the service. In fact, while we initially thought customers would use the service for emergency items, we’re finding they use it for its sheer convenience, like a quick fix for a weeknight meal.”

This is similar to the behavior regular delivery services noticed during the pandemic, when customers were using Instacart and DoorDash not for emergency items, but for ice cream, snacks, and alcohol.

Walmart’s announcement may make it the largest drone delivery trial in the U.S. by volume of households serviced, although Google’s Wing may still hold the number one position. It has been delivered items in the U.S. for a few years now, alongside operations in Australia and Finland.

In March, Google announced it had completed its 200,000 drone delivery. In the U.S., it partners with several suppliers, such as Walgreens, KFC, and others to deliver items from strategic hubs.

Both operators lose a lot of money for each delivery, but are backed by the ambition that this type of delivery will become commonplace, as food and grocery delivery has become to many Americans. According to leaked Amazon documents, Prime Air would have cost the company $63 per order in 2025.

The market size for drone delivery was valued at less than $1 billion in 2022 by Fortune Business Insights, however, it estimated that by 2028 the market size will be $31.8 billion.

To reach that value, the Federal Aviation Administration (FAA) will at some point have to lower the requirements for drone delivery. Currently, a pilot needs to be on-hand to pilot each drone, which makes the industry commercially unfeasible.

In the future, there might be room for a pilot to operate hundreds of drones, with a dashboard that can alert them to any issues or obstructions. Google and Amazon were both trialing self-piloting drones as well, which would not need a pilot. Until that time, drone delivery will continue to be a valuable service in certain parts of the world, such as delivery of medicine in Rwanda and Ghana, but won’t be able to replace car or bike delivery in terms of cost or scalability.