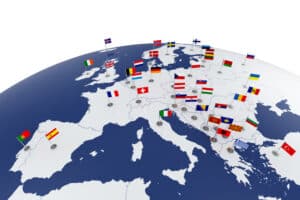 Collaborative efforts will help transform Europe’s cities and regions into the next era of digitalization.

Europe’s ambitious environmental and digital transformation goals are only as strong as the individual municipalities that participate. Luckily, they seem poised to make impactful contributions to the work, many of which were highlighted recently in the webinar “Digital Decade for Regions and Cities” hosted by Futurium and Living-in.EU.

Leaders in the movement note that everyone must be on the same page about where the transformation is headed and why. Outlining an inclusive and sustainable pathway for even the smallest regions allows each community to do its part.

This past September, EU leaders published “The Path to a Digital Decade,” which provided a playbook for individual municipalities. It included four key areas—skills, public services, infrastructure, and business—and would guide member states through determining their own approach and contributions to the overall goal.

Rita Wezenbeek, Director of Connectivity in DG CONNECT, opened the webinar by discussing the EU’s vision for this integrated and cooperative approach. It will require input from EU leaders, but truly efficient adoption will only occur if local and regional leaders offer feedback on roadmaps and implementation.

The European Way offers a cyclical approach to ensuring that everyone, from European country leaders to local authorities, benefits from digital transformation. More importantly, each entity must have ownership in the process.

The reasoning behind the co-creative process is to offer the best chance to include more rural areas in the plan. Digitization is a critical component of managing public services and improving response times. Still, more rural areas have traditionally struggled for access to the technology and connection necessary to make it happen.

Europe’s solution is to increase funding for small to medium-sized cities and incentivize two cities working together toward a particular goal of digitalization. Examples of this approach include the outline given by Prof. Kristina Sinemus, Minister for Digital Strategy and Development, Hessen. Hessen’s regional digital decade strategy focused a significant amount of resources on the local level to help municipalities digitize public administration and energy.

The region also creates a database of best practices designed to offer guidance and critical strategy for even rural areas. As more of these areas cooperate, they’re able to take advantage of what works in similar regions to ensure timely adoption without significant resources spent on the strategy process themselves.

Hessen was an early adopter of Living-in.EU. The region also emphasizes a citizen-centric approach, noting that digitalization efforts should provide citizens with benefits first. Hessen’s focus outside the typical hotspots for technology will improve connectivity across the board and help make the entire region a solid choice no matter where citizens choose to settle.

Focusing more on the local data as initiatives move forward

The data repository available to drive decision-making for Europe’s digital age is growing. Still, it tends to be concentrated in larger cities and hubs. It’s still challenging to get the data necessary to explore outlooks in smaller areas. One response is self-service questionnaires in which these small to medium cities can self-report their progress. National databases can cross-reference applicable data to create better indicators of status.

With more data, all cities should be able to benchmark themselves against other municipalities. This methodology is yet another way for cities to cooperate as they move the needle towards an EU-wide digitalization strategy.

Part of the webinar focused on strategies for localizing these efforts even further. Data plays a significant role in the drive to localize—for now, difficult-to-find data hides weak points and potential risks. However, working groups feeding into the development strategy can help knit together critical data sources.

Several regions have also developed portals for ordinary citizens to connect with digitalization efforts. They’re able to contribute their views and offer feedback directly in the public space. On the other side, they can identify services they need that have already been digitalized and are available.

Advice for developing a digital strategy

The webinar contributors then discussed a bit about where local governments and regions could begin working on a digital strategy. Their advice included:

Collaboration is the cornerstone of the initiative. While different components will take different approaches and focus on different needs, collaborative efforts will help transform Europe’s cities and regions into the next era of digitalization.