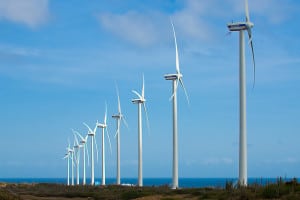 How Aruba used a low-power wide-area network to form the backbone of its smart grid efforts.

Aruba, a tiny island off the coast of Venezuela, needs to get its electricity from somewhere, but like many island economies, electric rates are expensive — approximately 28 cents/kWh (kilowatt-hour) more than twice the U.S. average. The country remains dependent on imported fossil fuels, with about 80 percent of its electricity generated using heavy fuel oil, according to the National Renewable Energy Laboratory. That leaves the island highly vulnerable to global price fluctuations.

The government of Aruba has a goal to become 100 percent independent of fossil fuels by the year 2020. In order to accomplish that vision, the island has been investing in wind power, solar, biogas, and energy storage to serve its 42,000 residential and commercial customers. Aruba currently has a 30 MW wind project that serves 17 percent of its electric consumption, with another 26 MW wind farm on the way.

Wind, solar, and energy storage, however, are normally paired with a smart electric grid that can reduce energy consumption at necessary times, or smooth out variations in power supply when the wind fails to blow or the sun doesn’t shine. N.V Elmar, the sole provider of electricity on Aruba, has programs that include smart electric meters, smart street lights, water monitoring, and energy efficiency.

To power a smart grid, however, requires a networking technology. Cost, network longevity, coverage, and reliability all played important roles in N.V. Elmar’s decision on which type of network they were going to deploy.

In late 2013, N.V Elmar chose to go with a low-power wide-area network to form the backbone of their smart grid. The technology they chose, Random Phase Multiple Access (RPMA) from Ingenu, was used as the network for 50 smart electric meters, but expanded greatly within a single year by adding distribution line monitors and smart streetlights to the network. Now, N.V. Elmar operates more 50,000 endpoint devices across the entire island.

A manager with N.V. Elmar said, “When we initially launched the RPMA network, we were focused on smart grid initiatives. However, during a very short time frame, we have been able to augment our services by adding an array of smart applications without the need for incremental network investment.”

Some of those augmentations included monitoring to help N.V. Elmar track oil pressure levels in its transformers, which helped with predictive maintenance. Advanced metering infrastructure (AMI) technology was also rolled out across the RPMA network. Roughly 1,800 NXT Luminaire street lights were also included in the network, which allowed them to be controlled and monitored simultaneously, giving N.V. Elmar more complete insight into the entire grid’s overall energy usage.

It’s difficult to say whether a similar smart grid in a more typical location would be as feasible as what N.V. Elmar implemented. One of the benefits of RPMA is that the low-power devices can last 20 years on battery power alone, but that benefit might not be necessary in cities or locations with more existing infrastructure. Or, they might need more bandwidth per device, which isn’t what RPMA is built for.

That said, for a greenfield project, like the one in Aruba, the benefits of LPWA technology might be bigger than the downsides. The wide-area coverage means that fewer installations are necessary, which is important when devices can’t simply be attached to an existing piece of infrastructure. Ingenu touts the RPMA’s network architecture, which allows a utility to model and deploy a system easily and with low cost, particularly when they can start from scratch.

We’ve talked about the types of IoT networks before, and certainly the debate between the different technology platforms will continue as different kinds of municipalities evaluate what works best for them and their particular needs. Either way, it’s exciting to see real-world returns happening in such small timeframes—they should only accelerate from here as technologies and implementation strategies improve.