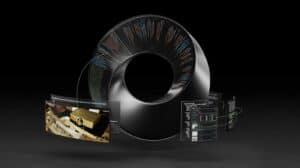 NVIDIA has announced new updates to its metaverse development platform, including an avatar creator and AI which generates faces from audio files.

The launch of the Omniverse Avatar Cloud Engine may be the most important of the bunch, offering developers with a suite of AI models and services to be deployed in video games and as chatbots, virtual assistants, and digital twins.

SEE ALSO: Why Your Digital Twin Will Be Essential in the Metaverse

“Our industry has been on a decades-long journey teaching computers to communicate and carry out complex tasks with ease that humans take for granted,” said Rev Lebaredian, vice president of Omniverse and simulation technology at NVIDIA. “NVIDIA ACE brings this within reach. ACE combines many sophisticated AI technologies, allowing developers to create digital assistants that are on a path to pass the Turing test.”

NVIDIA has also made significant improvements to PhysX, its physics simulation solution which is used in a plethora of video games already. The improvements should make the rendering of virtual objects more physically accurate.

There has been a focus on improved collaboration with this Omniverse update, with an overhaul of the USD-based collaborative tools, improving speed and performance while reducing the chances of workflow loss.

The launch of Audio2Face allows developers to create visual animations of faces directly from an audio file. This should make the development of believable characters from books and other media easier for video game and metaverse developers.

“The metaverse is a multitrillion-dollar opportunity that organizations know they can’t ignore, but many struggle to see a clear path forward for how to engage with it,” said Rev Lebaredian, vice president of Omniverse and simulation technology at NVIDIA. “NVIDIA Omniverse closes the gap between the physical and virtual worlds, and these new tools, technologies and collaborations make it possible to leap into the 3D internet today.”

The company is aiming to be a major part of the metaverse, with CEO Jensen Huang calling it “a new economy that is larger than our current economy.”