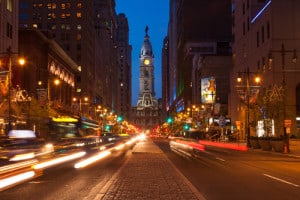 Until recently, the City of Philadelphia had no traffic operations center, but now they can see what’s happening on roads in real time.

Name of Organization: City of Philadelphia

As with any major metropolitan area, the City of Philadelphia has its share of traffic headaches. The city is fed by two major interstate highways, which converge on a central-city business district which straddles about 10 square miles between two rivers. The city’s streets are laid out in a grid pattern, first designed in the 1600s by William Penn, who originally chartered the colony of Pennsylvania.

Until recently, the City of Philadelphia was the only city among the 10 largest municipalities in the United States without a Traffic Operations Center (TOC). As documented in a regional planning report, the city owns and operates 2,924 traffic signals, the third largest municipal signal system in the country, representing more than 21 percent of the signals in Pennsylvania.

As part of the reconstruction of I-95 in Philadelphia, the Pennsylvania Department of Transportation (PennDOT) is constructing signal improvements and traffic surveillance systems on parallel arterials to handle an anticipated surge in traffic. To operate these signals, PennDOT is purchasing new traffic signal system software for the city.

The city needed a full-functioning TOC to provide capability to actively manage traffic signals; provide situational information about the city’s arterial system; enhance incident management capability; and promote corridor management. The goals of the TOC were to”

How This Challenge Was Met:

The City of Philadelphia launched a TOC designed to monitor the traffic in real time so the Streets Department can adjust its thousands of traffic signals, signs and throughways in case there is a massive influx of vehicles or pedestrians in one area.

Critical information must also be pushed to other agencies including the police department, the Delaware Valley Intelligence Center and PennDOT, who adjust electronic messaging signs to notify people to move in different directions in the event of traffic jams or other unexpected disruptions. Thousands of CCTV cameras to monitor arterial streets were installed, as well as a management system to disseminate traveler information.

The TOC’s technology is built upon a systems architecture consisting of an Ethernet-based fiber network connecting central system software to local field units. A combination of fiber assets from the Streets Department, PennDOT, and Philadelphia’s Office of Innovation of Technology are being used to communicate with field equipment and to distribute traffic information to multiple hubs throughout the city.

The city also turned to integrated control room visualization solutions boost situational awareness. As the operational nerve center of an organization or system, this helps address the requirement that control rooms are able to provide the right data to the right operators allowing them respond to situations in real time. The city implemented a video wall solution from Barco, outfitted with control room management software and integrated with a Genetec VMS, enabling the city to migrate from passive management of the street systems to a more proactive approach.

The screens are rear-projected LED displays, and the wall is powered by Barco’s control room management software, which configures how and where content is displayed. Operators can create perspectives (user-defined layouts) to view data, images and video in the most optimal way.

Benefits From This Initiative:

The system enables TOC administrators to send, receive and display critical information from other agencies, helping traffic engineers to identify problem areas on the roadways in real time, making better, faster decisions to provide the most efficient response to incidents.

In emergencies, the police department, fire department, and Office of Emergency Management use video feeds to view the situation and determine the appropriate assets to dispatch. Video is also used to route emergency vehicles, trying to avoid traffic congestion and other bottlenecks.