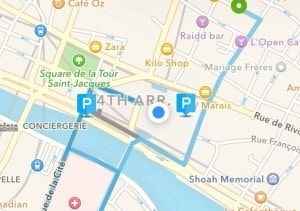 A smart parking mobile app from Parkeon can reportedly predict parking spot availability in Paris, France, with a probability of 80 percent.

Recent United Nations statistics show that 54 percent of the world’s population lives in urban areas, a proportion that is expected to increase to 66 percent by 2050 – or an additional 2.5 billion people crowding into metro areas. That’s a lot of people that need to move around, meaning there will be increasing amounts of automobile traffic, as well as transit ridership.

Enter real-time, smart, mobilized systems to help manage growing demand for infrastructure. Parking is one part of the challenge, with a need to help drivers quickly get to available spots, thereby alleviating potential congestion on streets.

Parkeon, a company supplying parking and transit systems to customers around the globe, needed to develop such a capability. The company’s core expertise is payment solutions such as multi-space parking meters, mobile phone payments, ticket vending machines, and more. Their systems are found in over 3,500 cities and 55 countries worldwide. As a result, Parkeon has access to considerable volumes of data regarding the habits of city drivers. The company needed a solution that could help them build an app with reliable predictions of parking availability, as well as enrich the parking meter data to create greater intelligence.

Using Dataiku Data Science Studio (DSS), Parkeon built a mobile application that predicts zones where drivers are more likely to find parking. The app employs state-of-the-art predictive algorithms that process millions of transactions coming from parking meters every day and combines them with geographical data coming from the open-source tool OpenStreetMap, which pinpoints locations of interest such as restaurants and shops. 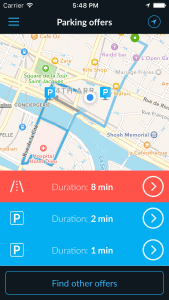 Measurable/Quantifiable and “Soft” Benefits From This Initiative

Parkeon’s iOS-based app – called “Path to Park” – employs and enriches machine data and predictive algorithms in a big data environment. The app includes the Dataiku DSS predictive algorithm to predict parking availability in each street, according to parking meter data and points of interest data. In addition, the company can use its data to develop and refine predictive models that put drivers in the right place at the right time.

Parkeon is also scaling with the growth of the app and extending it to several cities. Using both Dataiku DSS, and their parking meter and geographical data, Parkeon is now able to predict three parking options around the driver’s location, increasing the probability for drivers to find a parking spot in their near vicinity by more than 80 percent.