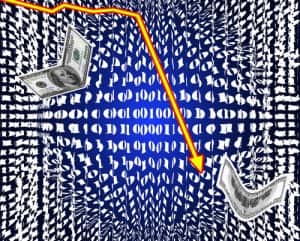 In 2011 Hibernia Atlantic funded the creation of a transatlantic communications cable for more than $300m so it could cut six milliseconds from the time it takes a trade to be made between the City of London and New York City.

Hibernia did this because they believed — and still believe — many of their potential customers, financial firms, use supercomputers to execute hundreds of trades per millisecond through the use of financial algorithms. These algorithms are so lucrative that a brokerage firm can gain $100 million per millisecond shaved from a transaction.

Today, traders have gone a step further and insist on installing their high-performance computers on the trading floor to minimize latency by cutting the physical distance between the devices and the trading floor to almost zero. The rise of high-frequency trading (HFT) through the power of higher performance computing (HPC) has changed Wall Street and in the future may influence other HPC markets as well.

HPC is a form of computing where you either have a super-powerful processor or aggregate computers together to deliver higher performance than one can get from a typical desktop computer. In the world of finance, it is mainly used to help power the rise of HFT. HFT, in particular, refers to trades that are done rapidly, with computers making decisions based on commands and instructions given beforehand in the space of milliseconds.

HFT programs are sold alongside machines which are capable of processing trades at speeds unimaginable to the average consumer. A financial trader wants a computer with enough memory to ensure the highest speeds- and least amount of latency- possible. That way, a trader can avoid having to actively watch the markets and input orders manually and instead has HFT programs make decisions based on certain parameters regarding share or commodity price movements.

The rise of HFT has increased the volatility of the financial markets. In 2010 the New York Stock Exchange (NYSE) lost one trillion dollars of value in a few seconds. This was the fastest market crash in U.S. history. While some traders feared the U.S. economy was going to turn sideways, many traders took the opportunity to rent out computerized high-frequency traders (HFTs) and made trades while the market was severely down.

The speed at which the trades take place adds some vulnerability to the system. In 2013 the Associated Press’s official Twitter account was captured by a group of hackers. These hackers falsely reported there was an attack on the White House. In response, the Dow Jones Industrial Average dropped about 150 points in the space of three minutes due to the false report. In the space of those minutes, HFT machines automatically reacted to the report and traded shares that were worth millions of dollars.

HPC programs have to be flexible and scalable to be effective. Financial traders are not programmers, so they want machines they can alter quickly without having to learn a difficult programming language. This means making the algorithms easy to change when desired. Since traders are not expected to repair the systems when they make errors, the programs also have to be robust because time is money and the traders cannot be expected to know when a mistake is made and how to fix it quickly.

Algos in, humans out

As a result of the rise of HFT, there has already been a shift in the financial industry. There used to be many companies where human traders would predict the price of commodities and sell this information as the company’s product. Due to the rise of HPC, most of these functions have been replaced by algorithms. While fewer people do the trades themselves, many people are now used to program and optimize the algorithms.

Aside from flexibility and scalability, HFT programs have to be reliable. As the AP Twitter hack demonstrates, HFT robots move quickly, and millions can be exchanged in minutes based off a false news report done through social engineering techniques and malware. In a different scenario, where the HFT robots are taken over by an adversarial entity, a company can lose hundreds of millions as they sell low and buy high at the wrong intervals.

This extends to the “real” world as well and not just purposeful errors. If someone trips on a wire that connects the HFT machines to the Internet (they would be wired because wired connections are faster and more reliable than over-the-air connections), an HFT program might send the buy and sell commands at the wrong times. If a millisecond can save a company millions, then a few minutes could damage a company’s fortunes. Companies need to run their HFT programs well to maximize their wealth.

All of these issues in the world of finance can enrich the HPC in general. HPC is already used in such fields as physics, meteorology, and medicine. In fact, HPC is already used to identify people’s faces in a crowd. Car manufacturers and others in the transportation industry are using this technology to model how cars function. Any improvement made in the world of HFT can be valuable not just to financial companies but also to enrich HPC in general in fields as varied as chemical physics and cybersecurity. Therefore it is important to follow improvements in HPC in the world of finance not just to make money but to take that experience and apply it to many other fields that can benefit from improved HPC.