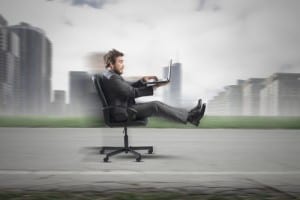 The difference between real-time and “right time” is defined by your clients. They care less about the time frame of action than the outcome.

To some, “real-time” means a nanosecond response to a digital event. To others, it means the right response at the right time. Can we have it both ways?

A few weeks back at the Teradata Partners conference, I had the opportunity to sit down with Stephen Brobst, chief technology officer at Teradata, to talk about the true meaning of real-time, and what it means to businesses and their customers.

When asked about the drive to a real-time enterprise, Brobst, a trained engineer, gave an engineer’s response. “I prefer ‘right time’ to real-time,” he said. “’Right time’ is defined based on your business process. ‘Real-time’ is a technical term. Real-time, to some people, means every 30 minutes. I wouldn’t consider that real-time. Nor would I consider five minutes. As an engineer, I would want to get out an oscilloscope and measure microseconds. If you’re talking about control systems on an airplane, that’s real-time.”

See also: Blockchain vs. Bitcoin – in 2018 will we finally get the difference?

To Brobst, what most enterprises are pursuing today, in terms of customer delivery and awareness, is more of a right time play. However, the use of the term real-time now broadly gets applied to many situations seen across the spectrum of business activity.

Here at RTInsights, we explore real-time environments from both technical and business perspectives, from the live monitoring of aircraft engines and city traffic to the vaguer — but just as valuable — applications of up-to-the-minute customer engagements.

Recently, the folks at VoltDB issued their own study on consumer perceptions about real time, which underscored the way the term is evolving from technical nanoseconds to on-the-spot customer engagements. To put it bluntly, real time is in the eye of the beholder.

Consumers now “expect immediate satisfaction and access to the services they require,” the survey report’s authors note, drawing on the responses of 2,000 consumers. “The ability to deliver on these services in real-time requires an increasing amount of speed, relevancy, and timeliness to cut through the noise of options and gain allegiance with consumers.”

For 71% of respondents, real-time means “immediate” – again, a vague threshold – while 17% consider it to be anything delivered within five seconds or less. It’s interesting to note, then, that a majority of the consumers surveyed, 52%, don’t tolerate latency at all. They agree that waiting — even for a few seconds — for something that they expected instantaneously “annoys them.”

More than 80% say that “speed is one of the most important aspects of a positive customer/user experience.” The survey’s authors refer to this consumer sense of impatience as “lag rage.” Rightly or wrongly, some companies have stepped up and invested heavily to provide instantaneous experiences – think Google’s online search speed), setting the real-time bar higher for the entire market.

The VoltDB study’s authors caution that “real-time issues can often be caused by technical challenges. Most database platforms perform either transactions — such as when you purchase a product — or analytics — analysis of existing customer data that dictates what “personalized” offers you receive. The problem lies in the latency that occurs when data moves from a transactional database to an analytics database, killing real-time opportunities on the spot.”

Not all transactions have to be responsive to the subsecond level – the service or information just need to be there when the customer or user needs it.

Brobst provided an example of such a “right time” digital encounter: “Let’s say you’re on a flight into Chicago O’Hare,” he illustrates. “That means it’s always late — and your flight is late. The airline can detect that your flight is late, and will know, and they actually have an event trigger — if it’s less than 15 minutes late, there’s enough room in your layover time. If it’s more than 15 minutes late, it invokes a process that says, who’s on the flight? If you live in Chicago, there’s no action to take. But if you are connecting to LaGuardia, it’s going to look to see if you have checked baggage or not and rebook you automatically.”

A lot of analysis happens “behind the scenes, so by the time the plane lands, and you get off your flight, we know exactly what to do for you. We have 30 minutes before the plane lands — a long time to do some really sophisticated analytics. Thirty minutes isn’t real time, but that may seem like real-time to you,” he said.

Again, real-time is in the eye of the beholder. Sometimes, it needs to be nanoseconds. Other times, there is a cushion of minutes, hours, or possibly even days. Applied when and where needed and expected, it becomes a powerful tool for growth.