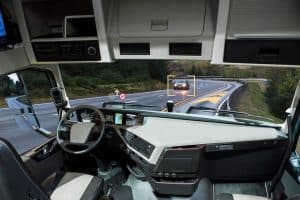 With full autonomy, operating costs would decline by about 45 percent, saving the US for-hire trucking industry between $85 billion and $125 billion.

Just recently, it was reported that a driverless truck made a cross-country trip, running 40,000 pounds of butter from Tulare, California to Quakertown, Pennsylvania. The 2,800-mile-trip took three days.

Of course, the truck did not travel entirely on its own — a technician rode on board to keep an eye on things. But are we ready to have huge, autonomous tractor-trailers thundering down the interstates? Many industry observers say it’s inevitable — driven by the attractive economics. “Sixty-five percent of the nation’s consumable goods are trucked to market,” according to a report released by McKinsey. “With full autonomy, operating costs would decline by about 45 percent, saving the US for-hire trucking industry between $85 billion and $125 billion.

See also: Is Predictive Routing of Empty Cars the Future of Ridesharing?

“Autonomous trucks, which will change the cost structure and utilization of trucking—and with that, the cost of consumer goods,” according to a report released by McKinsey. “With full autonomy, operating costs would decline by about 45 percent, saving the US for-hire trucking industry between $85 billion and $125 billion.”

There is technology investment required up front, of course. “The self-driving trucks are equipped with lidars, sensors, and other technology to allow the vehicle to operate without human intervention,” the McKinsey analysts note. “Basic versions of the kit cost as little as $30,000; high-end packages might cost $100,000.”

Autonomous vehicles are still in their pioneering days, and the trucking industry may not be ready in other ways, either. “Current national policies and regulations for the autonomous trucking market remain absent,” writes industry expert Brett Wetzel. “The industry thus faces new questions about the future of automation.” Plus, he adds, automation occurs along a spectrum, and most efforts are in the earliest phases.

Driver Assistance: “One function controlled automatically (i.e. cruise control).Can include dynamic cruise control or lane assist features—but these technologies can only be implemented individually at this level.”

Partial Automation: “Both steering and acceleration/deceleration are automated, with the driver ready to take vehicle control. “involves two primary control functions working together.”

Conditional Automation: “The level at which automation starts to become more intensive, as more consistent highway driving is completely automated. All safety-critical functions are automated, but the driver is present for certain traffic and environmental conditions.”

High Automation: “The driver is still present in the vehicle, but in this level, the vehicle would be operating fully on its own in all scenarios.”

Full Automation: “Expected to perform equal to a human driver, in all scenarios and conditions (driver not present).”

McKinsey agrees the movement to autonomous trucking will occur in gradual steps — and no truck will be going it alone, as the butter delivery truck was recently. Authors of the consultancy’s report point out “the first two waves will feature ‘platooning, ‘a technique to connect wirelessly a convoy of trucks to a lead truck, allowing them to operate safely much closer together and realize fuel efficiencies. Platooning with drivers, the first wave, will still require a driver in each truck. Over the next three to five years, networks of these connected convoys will develop, utilizing algorithms to link up.”

The first fully autonomous trucks, operating at scale without drivers from loading to delivery, will come along in 10 years. However, “it will take many years for the autonomous fleet to displace the non-autonomous national fleet.”