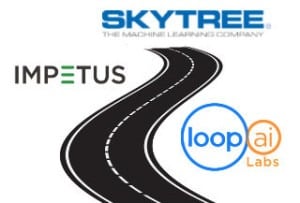 Our road trip video series rolls on, with visits to three companies.

Analytics companies have different strengths and use cases. In the video below,  Impetus, Loop AI Labs, and Skytree each explain their technology strength — whether that’s streaming analytics, predictive analytics, or cognitive computing.

Adrian: Hi, I’m Adrian Bowles, founder of STORM Insights and executive analyst with RT Insights. We recently took RT Insights on the road for a day of vendor briefings in Palo Alto. We are posting a few long form interviews from that trip at the RTInsights.com site and we will continue to add videos as we find interesting companies and products in our coverage areas.

In this video we give you a few key points from executives we spoke with representing Impetus Technologies, Loop AI, and Skytree. Let’s start with Anand, head of products at Impetus.

Anand Venugopal: StreamAnalytix is the name of the product. It is a real-time streaming analytics platform for enterprises. It lets enterprises build streaming analytics applications very rapidly and deploy them very quickly and take them into production. It came to market with supporting Kafka, RabbitMQ as the message queues and the streaming engine was based on Apache Storm. It is all native to Hadoop and NoSQL. We use Hadoop and NoSQL databases as a repository. Hbase, Cassandra supported, we support the Hadoop file system overall. We also support the Solr and Elasticsearch’s indexing stores.

Adrian: Next, we’ll hear from Patrick, the chief scientist at Loop AI.

Patrick Ehlen: Our aim is to do what we call human capacity cognitive computing. By human capacity, I’m sort of signaling out the things that make the human communication system distinct from what you might see in the animal kingdom and that kind of thing. Humans have a facility with three different things that you don’t typically see in other communication systems and that’s multi-modal communication. We can use our hands and gestures. I can take a broom handle and have it mean something in a conversation that could substitute for a verbal symbol or something like that. We are very good at that. We also have this facility with symbol recursion, where we’re able to take a symbol and fold it into a function and take the output of that function and fold it into another function which gives us a very rich and complex sort of syntactic capability and also semantic capability.

What we’re trying to do is break machines out of the confines that they have currently with language understanding systems and introduce these multi-modal and recursive systems into a cognitive computing platform that will be able to understand language the way that we do.

The thing that distinguishes us is the fact that we’re really able to understand that data within its own context. A lot of natural language processing techniques start with some model of the world and of a particular language. They make a bunch of assumptions about what things are supposed to mean in the context of that data, then they try to get at what you’re getting at but starting at all those assumptions. Our system starts from scratch and it doesn’t start with any assumptions about what your data looks like. It doesn’t even make assumptions about what language you’re using because there are companies out there that have documents that switch quickly from one language to another. It might go from English to Tagalog and back again in the middle of a sentence and you don’t want to make assumptions about what language that’s in or what language you expect it to go into. You want it to have a system that can actually just learn that kind of thing as it’s going along. The real distinguishing factor with us is we have something that is language independent.

Adrian:  Finally, a few words from Robert, the VP of marketing at Skytree.

Robert Dutcher:  We provide an end-to-end machine learning platform. Really, we focus on everything from data preparation for the data scientists to actually building of the models and to actually deploying the models. We provide, really, every step of the solution for data scientists in the enterprise. We do focus quite a bit on a lot of enterprise-type capabilities as well.

We really cater to a wide range of users. Many of our users are your expert data scientists. They prefer, usually, a command-line interface or a Python SDK. Interfaces that normal folks would have a difficult time operating within. We also have quite a few users that are less sophisticated data scientists or more junior data scientists, including even some folks that could actually be considered kind of data analysts as well.

We actually support both supervised and unsupervised learning. We’re actually seeing a trend of actually combining the two. It’s not just about supervised or unsupervised. That really is where we start seeing the state of the art, where you see that supervised and unsupervised learning kind of combined. What we’re now seeing, is actually even a tighter integration where you’re actually leveraging both simultaneously. When you find an anomalous pattern, you can actually start looking at it and analyze. Where was the source of this anomalous pattern? You can then use prediction and predict out who is potentially affected by this potential breach or fraudulent activity. What you actually have now done is you’ve moved from fraud detection, to fraud prevention, where you can actually stop the fraud before they even do it, before somebody even tries to do a transaction on your credit card. That’s why sometimes you’ll see, I think, with credit cards, all of a sudden a credit card will just show up in the mail saying your old one is cancelled, your new one is here. A lot of times what’s happened is there was maybe some small breach, maybe a big breach, or some potential activity that may have compromised your card, and they’re replacing it before any fraudulent activity ever even happened. That’s become the state of the art. It’s really about doing a combination of the two, I think.

Adrian: Thanks for watching. We’ll be posting additional videos from this trip and more on RTInsights.com.

Research from Gartner: Real-Time Analytics with the Internet of Things
Frontiers in Artificial Intelligence for the IoT: White Paper
The Value of Bringing Analytics to the Edge
Keeping Track of Gear in the London Underground, Wirelessly
Winning Micro-Moments With Real-Time Marketing