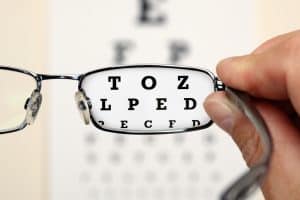 While the researchers do not recommend skipping an optician’s appointment, they see the online AI-test as a potential evolution from the 19th century exams.

For over two centuries, the Snellen chart and others of that ilk have been used to test visual acuity, but that may soon change with the coronavirus forcing people to test eyesight at home.

Researchers at Stanford University have developed what they believe is a far more accurate eye test, which utilizes artificial intelligence to remove human error and improve accuracy.

“The ubiquitous eye exam has no mechanism for reasoning about uncertainty and as such, suffers from a well-documented reproducibility problem,” said Stanford University computer scientist, Chris Piech, in a research paper.

Part of the issue with current eye tests is patients guess the words once they become blurry, leading to inaccuracies. Opticians also occasionally fail to properly diagnose eye diseases, which can lead to further damage later in life.

“For patients with eye disease, the novel ability to finely measure acuity from home could be a crucial part in early diagnosis,” said Piech. “Our approach is incredibly accurate, easy to implement, and can even be used at home on a computer. With further input, we hope for this to be used as a foundation for revolutionizing visual acuity testing.”

While Piech does not recommend skipping an optician or doctor’s appointment yet, he does see the online AI-test as a potential evolution from the 19th century exams.

For those wanting to try it out, the test is available at myeyes.ai. The test only takes a few minutes, and you only need a measuring tape and credit card.