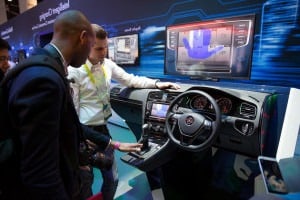 Autonomous cars, personal assistants, and robots that give yoga lessons. For better or worse, the world of AI has arrived.

In the beginning of January, businesses and journalists of all sorts converged on Las Vegas for the annual CES conference for consumer electronics and consumer technologies. While many of the products showcased and announced during the four-day hullabaloo aren’t of particular interest to us—8k TVs and virtual reality headsets, for example—we were intrigued by the significant presence of artificial intelligence  products this year. It permeated just about every type of product, and, for many businesses, is at their forefront of their efforts moving into 2017 and beyond.

Unsurprisingly, the rise of autonomous cars

The fact that this year’s CES was heavy on autonomous cars—even just ahead of the Detroit Auto Show—was no surprise.

Nvidia, the company best known for creating graphics processing chipsets for gaming and data analytics purposes, surprised many by revealing its own autonomous car for the first time. They’re partnering with Audi to bring the technology to the Q7 SUV, and hope to end up with what’s called a “Level 4 autonomous vehicle” – one that it can drive completely by itself, without human intervention. The system is built atop the company’s Drive PX 2 AI car computing system, which leverages the power of onboard GPUs to react to obstacles and make intelligent decisions quickly. Nvidia also claims that, when using their DGX-1 deep learning computer, companies should be able to bringing training times down from months to days. For example, the Q7 present at CES reportedly learned how to drive in just four days. (Related: “Will Intel accelerate the race to deep learning?“).

Tesla’s Autopilot feature is also getting some competition from Mercedes, which claims to best the electric car company’s offering by actually making their system seem less intelligent than it actually is. According to Mercedes, that will prevent drivers from putting too much trust in the autonomous features and keep them focused.

Nissan’s all-electric Leaf will soon come with the company’s ProPilot technology. Neodriven is taking a completely different approach with a $1,000 product that could make any car semi-autonomous, based on an open-source effort created by George Hotz. Remember him? He’s the guy who spent years hacking iPhones and PlayStation 3s.

We all knew autonomous cars were going to be everywhere, but the variety of implementations were impressive, and bode well for the technology’s future.

Everyone needs an (AI) assistant

There are a few primary players in the effort to put AI-powered “assistants”— Amazon’s Alexa, Google’s Assistant, Microsoft’s Cortana—in just about every consumer electronic device possible, and CES proved this many times over. Nissan and BMW went for Cortana, whereas Volkswagen and Ford have opted for Amazon’s offering.

These offerings aren’t all that different than what people can currently experience with their phones, such as asking relatively simple questions, or doing slightly more complex tasks like making a restaurant reservation while on the go, so why are so many companies pushing these AI-powered assistants? Forbes thinks that it’s all about gaining an edge on the competition—just one more feature to offer that someone else might not be able to match. But it’s not a stretch to imagine that companies are just biding their time before cars and other big-ticket products come with enough computing power onboard to make more sophisticated cognitive computing a reality.

AI meets just about everything

Kolibree released what they’re calling the first intelligent toothbrush, one that analyzes the user’s technique and can give theoretically useful feedback. The CEO, Thomas Serval, “Patented deep learning algorithms are embedded directly inside the toothbrush on a low-power processor. Raw data from the sensors runs through the processor, enabling the system to learn your habits and refine accuracy the more it’s used.” 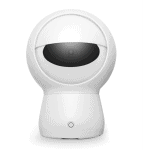 L’Oreal announced a similar product, but for brushing hair, and the company claims the variety of sensors, like a microphone to gather insights on frizz or split ends, can gather data about the health of the user’s hair. Meanwhile, Vobot, a hardware startup, is building an alarm clock that “tries to understand users’ demands through algorithms and cloud computing.”

There’s also this strange mood-sensing camera powered by Amazon Alexa, and Ubtech’s “Alpha 2” robot uses Alexa to give yoga lessons, among other things.

Any skepticism about the claims of these products is generally founded—CES proves that we should be wary of products that claim to be AI-powered. It’s become a marketing buzzword, not unlike “4G” or “HD.”
That aside, it was exciting to see artificial intelligence—which has been talked about for decades but only recently is finding a genuine role in the products and services that companies make—take center stage. We expect next year’s CES to be even more AI-driven—for better and worse.