Home / Agriculture / Case Study: From Farm to Cloud, in Real-time 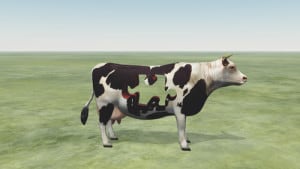 Keenan leverages the power of the cloud to provide better guidance to farmers on how to optimize their nutrition system for livestock down on the farm.

Opportunity or Challenge Encountered: Keenan, a provider of nutritional systems that provides guidance to participating farmers, wanted to improve the delivery of its nutrition system to help even more farmers optimize the yield from dairy and beef cattle in a repeatable and reliable way. As described in a case study, the company wanted to deliver real-time feedback and advice on feeding regimes to help farmers keep cattle in optimum health and production efficiency.

Keenan, a manufacturer of high-performance feeder wagons for dairy and beef cows, developed its nutritional support for farmers that may help improve yield by up to 25 percent without extra feed. The company services more than 30,000 farms across 26 countries and feeds millions of head of cattle every day. Keenan also employs animal nutritionists, scientists, and agricultural economists.

How This Opportunity or Challenge was Met: Keenan developed an infrastructure based on the Intel IoT Gateway powered by the Intel Atom processor, with a private cloud. The result of this effort was InTouch, a machine-to-machine system that automates the collection and transmission of feeding data sent via the cloud to in-house nutritionists for immediate interpretation and feedback.

InTouch supports a gateway attached to the feeder, which guides farmers through the mixing process to ensure an optimal feed mix. Data from the unit is collected in a gateway, along with information from the dairy production and processing side. Data is sent via the cloud for analysis, where algorithms decide which issues need to be addressed, raise a ticket, and alert the nutritionists who interpret and discuss with the farmer. An updated program sends data back to the gateway on the feeder, so the new information is there when the farmer next switches on the machine. “Now it’s about delivering actionable information in real time,” says John McCurdy, business innovation director.

At the time this case study was developed, InTouch was now installed on 3,000 farms, with a database that currently holds information on 23 million ingredients, along with feed efficiency information on 1.1 million cows. The company seeks to extend the benefits to a much wider customer base.

Benefits from This Initiative: By developing an end-to-end solution, Keenan can scale InTouch to process more data and reach more farmers around the world, the case study reports. The IoT-based system creates the opportunity to develop a new business model based on recurring income, versus one-time sales. Keenan seeks to extend the benefits to the wider supply chain, as food retailers seek consistent output from farmers.

:”While our scientists were looking for the best ways to feed cattle, our technologists were looking at the best way to share data between our nutritionists and our farmers,” McCurdy says. “Before we adopted an IoT solution, we were still dependent on farmers loading data from memory sticks and sending it to us. By developing an IoT-enabled solution, we have added a whole new layer of automation which makes it much easier for farmers to use.”