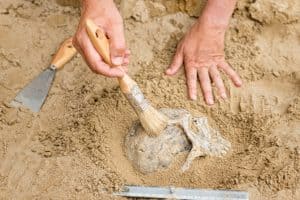 With dozens of Ancient Greek engravings being found every year, the tool could be remarkably useful for deciphering more at a faster pace.

Google’s DeepMind has built a new artificial intelligence tool to decipher ancient Greek engravings, which have been damaged and are missing words.

The AI, called Pythia, was fed data from 35,000 relics, with over 3 million words. From that data set, it was able to recognize language and grammar patterns and suggest which words are missing.

SEE ALSO: What Can You Do with Continuous Intelligence?

DeepMind tested the technology with researchers at Oxford University, pitting it against experts. Pythia was able to analyze 50 inscriptions in a few minutes, a lot faster than the two hours it took for the experts, and the humans made 30 percent more mistakes.

While Pythia could work independently in the future, the researchers still see it as a collaborative tool for epigraphists. Pythia will provide researchers with 20 possibilities for missing words, and they will be able to choose the correct one.

In the tests, Pythia had the correct sequence in its top 20 suggestions in 73.5 percent of cases.

With dozens of Ancient Greek engravings being found every year, this tool could be remarkably useful for deciphering more at a faster pace. It could also be imported to other languages, opening the field for all epigraphists to speed up their research.