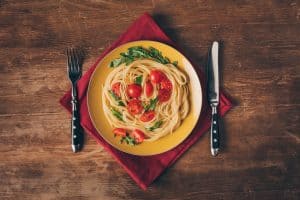 Utilizing image recognition, the app (available on iOS and Android) is able to automatically identify the food on the plate and the volume of it.

Tracking what we eat has become a lucrative market, with hundreds of apps built to track calorie intake, nutritional goals, and stick to diets. One of the issues in retaining users is the constant requirement to manually update the tracker, which can be a tiresome experience.

French startup Foodvisor feels the same way and believes artificial intelligence can solve this problem. Utilizing image recognition, the app (available on iOS and Android) is able to automatically identify the food on the plate and the volume of it.

After measuring each item on the plate, Foodvisor is able to provide an accurate calorie count, alongside nutritional values.

While the developers are hoping with time the AI will broaden its understanding of food items, reviews on the Google Play Store suggest the system is unable to recognize certain foods. It is also unable to recognize harder to distinguish things like sauces, oils, and seasonings.

Foodvisor currently offers the app as a one-week free trial, before trying to move users to a monthly subscription. The premium service offers an analysis of meals, diet plans, and one-to-one sessions with a registered nutritionist inside the app.

Even with the limited rollout, Foodvisor has raised $6 million in two funding rounds, the latter concluding late last month, headed by Agrinnovation. It recently launched a U.S. version of the app, which has surpassed two million downloads.

One of the biggest hurdles for the app’s future will be the ability to identify all ingredients, even in liquid forms. If a user needs to input half of the data they would on MyFitnessPal, it may still put them off, especially when paying per month for the service.