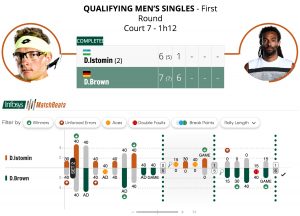 The winner of any professional tennis match usually comes down to which player makes the fewest mistakes. Doing so, however, depends as much on grit and determination as with knowing how an opponent is likely to react to any type of shot. To gain more insights before each game, tennis players and their coaches at the recent French Open prepared for matches by studying video and analytics to identify both their own strengths and their opponent’s weaknesses.

At the French Open, otherwise known in Europe as Roland Garros, players and their coaches were given access to StatsLounge, an analytics platform infused with machine learning algorithms running on instances of Red Hat Linux deployed on Amazon Web Services (AWS) that was built for Roland Garros by Infosys.

As a digital innovation sponsor of the French Open, Infosys opted to rely on a wide range of open source software, including Apache Spark in-memory computing framework, Apache Kafka messaging software and PostgreSQL databases to process incoming data streams from FDE, which provides a live data feed from the umpire, and Hawkeye, which provides access to video feed for tracking ball trajectory and player positions.

See also: Artificial Intelligence Brings Out the Real-Time Side of B2B

On the front end, Infosys is making use of React.js, a JavaScript library and Three.js to render 3D images. Those front-end interfaces access an open source Tomcat web server and Kubernetes clusters connected to backend data via microservices developed using Spring Boot (a framework based on Java) and deployed as Docker containers.

Other major components of the platform include Netflix Open Source Software (OSS stack), including Eureka as the service registry, Ribbon for service load balancing, Hystrix for resiliency, and Zuul as the gateway service.

Finally, Infosys tops it all off with an instance of Open Source Telemetry framework called Sunbird Telemetry, the Spring Boot Actuator and Prometheus container monitoring software.

Analytics for Fans, Too

The whole framework is designed from the ground up using best DevOps practices to be extensible, so Infosys is using much of the same technology to also develop applications for tennis fans at the game and watching from home. Those applications include MatchBeats that enables fans to follow live scores in a new immersive fashion; Courtvision, a 3D analytical tool that delves deep into match statistics to identify match patterns; Stats+, which determines which statistics have the biggest influence on the outcome of the match.

On the Roland-Garros Web site, the Slam Leaderboards application ranks the top players based on match statistics. Social HeatMap enables Roland-Garros to identify the top-ranking brand ambassadors for tennis on social media.

The long-term goal is to provide players and coaches with not just access to advanced analytics, but expand worldwide appeal of the French Open without altering the fundamentals of a match, explains Michael Tonge, director of partnerships at the French Tennis Federation. So players and coaches are not allowed to consult analytics applications during the competition.

Tonge says the three-year sponsorship relationship with Infosys is just the beginning. Roland-Garros, he says, is gearing up to start feeding analytics in real-time right into televisions broadcasts around the world next year.