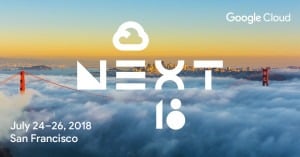 Google rolled out a lot of expanded offerings at their recent Google Next 2018, including leveraging machine learning and new edge processing capabilities.

Google this week launched a series of initiatives that leverage investments in machine learning algorithms to drive artificial intelligence (AI) into everything from data warehouses and contact centers to the network edge.

At the Google Cloud Next 2018 conference this week Google announced it is infusing machine learning algorithms into Google BigQuery, the data warehouse it makes available as a cloud service, that can be invoked using SQL statement to create an AI model.

Rajen Sheth, director of product management for Google Cloud Platform (GCP) told conference attendees that making it possible to create AI models using SQL statements will make AI much more accessible to the organizations that rely on SQL as the lingua franca for analyzing data.

“In just seconds you can create a custom AI model,” says Sheth. “We have one goal. To make AI simple and useful for you.”

That capability is being positioned by Google as a natural extension of Cloud AutoML, a service through which Google makes available reusable AI models that can be customized. New addition to that service unfurled this week include vision, natural language, and language translation services that can all be invoked via an application programming interface (API), which eliminates the need to for organizations to have machine learning expertise to employ AI models, says Sheth.

At the conference Miguel Angel Campo-Rembado, senior vice president for data science and analytic at 20th Century Fox, demonstrated how the media and entertainment giant is using Big Query ML to drive more informed marketing decisions in minutes based on audience segmentation and Iron Mountain, a provider of archival storage services, to apply Google AI technologies to searching and analyzing document stored on that service.

Overall, Sheth says there are now 14,000 customers paying to use Google AI services. On top of that, over 19,000 customers are actively using the Google Cloud AutoML service to one degree or another, including Chevron. Laura Bandura, a research analyst for Chevron, described how the oil and gas conglomerate is using the vision capabilities provided by Cloud AutoML to visually search a massive trove of images stored in thousands of distributed documents.

Google at the edge

Google also announced this week its intention to transform contact centers using AI. The Google Contact Center AI service, available in alpha, is designed to make it simpler to insert AI models into customer service operations. Google also announced this week an update to Dialogflow Enterprise Edition to make it easier to infuse virtual agents enhanced by AI models into customer management processes and applications. Twilio, Cisco, Mitel, Vonage, RingCentral and others have already announced plans to incorporate those capabilities into various platforms.

Finally, Google also unveiled Edge TPU, an instance of a processor family built by Google that is optimized to process AI models created using the open source Tensor Flow programming platform that Google developed. Google envisions the Edge TPU s will be embedded in gateways and connected devices to extend the reach of its AI cloud service. Google also announced that a third-generation of custom processors, known as Tensor Processor Units (TPU), are now available in alpha and that a second-generation of those processors, announced last year, is now generally available on the Google Cloud Platform (GCP).

Naturally, Google isn’t the only cloud service provider looking to pervasively apply AI. But Google as of late has been able to enlist SAP, Cisco, Salesforce it’s clear Google is on track to become a significant driver of real-time insights across the enterprise.