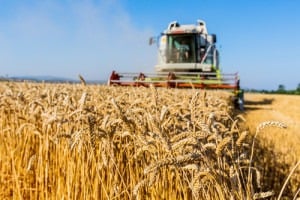 With so much industrial machinery starting to rely on and work effectively through artificial intelligence (AI), it was inevitable that the food and agriculture field would adopt the technology as well. The industry has had many changes over the past century, and the pace with which we grow food has increased, which has enabled the industry to meet the ever-growing demand.

That said, there is a desperate need for production to be more effective to meet demands in the future. One of the first steps of the farming industry into the automatic machinery was when Autonomous Tractor Cooperation (ATC) presented a prototype of an unmanned tractor named Spirit.

The truck was equipped with auto-drive technology, which combined laser gyroscope and radio navigations with the AI technologies. The first time a human will have to drive the tractor and the system will record all the movements that the truck makes. The truck can then work without having a driver, after its first manned operation. It will go through the same directions that the driver had taken during the manual operation.

Cognitive Technologies, a Russian company also has developed a tractor equipped with video cameras, navigation sensors, inertia and computing units. These additions allow the system to detect dangerous objects while also defining their size and coordinates, which then create high-precision maps.

[ Related: Using AI to Optimize HVAC Is as Easy as Riding a Bike ]

The latest development is from Tesla Motors, which has announced automatic trucks that are capable of transporting goods through self-driving technology. The technology may be out of reach for farmers now, but in the future, Tesla Motors aims to have its vehicles in widespread use in a variety transportation sectors, including the fresh harvest.

The future of AI and agriculture

However, those examples are just the innovation of old machinery with few additions. The goal of artificial intelligence is that one machine can do the work more efficiently and with more precision than a human. The machine should be able to take in its environment and come up with its own solution based on rationality and a specified goal.

The aim of AI-modified farming equipment is that it learns from the work that it does and become more vigilant and smarter than the last time it was working. It should be able to predict the outcome of a certain scenario and be able to act on its own accord to find a solution for any problem.

[ Related: Why precision agriculture could be a game-changer ]

Due to all these above requirements, digital agriculture has also been on the rise. Satellites, unmanned aerial vehicle (UAVs) and remote sensors have been developed and modified to monitor farms 24 hours a day every day, enabling the farmers to monitor their crops in a better way and be updated about when the harvest is ready.

Furthermore, these machines are able to monitor the fertility of the soil and how rich in minerals the soil, while this equipment also generate data on plant health. You will also discover anything related to weather due to these connected farming and be warned well in advance if any unfavorable weather conditions are approaching.

[ Related: Treating Lou Gehrig’s Disease With the Power of AI ]

Remote sensors are enabled through algorithms that let them interpret a statistical data and communicate it to the farmer. When farmers are more educated about their crops and soil, they will be able to increase their productivity by working on the aspects they may have been missing out due to the lack of knowledge.

AI in agricultural landscape will help farmers produce more with fewer errors. When AI enters the farming industry, there will be more accuracy relating to the expected yield at the end of the year. The only step is to educate the farmers in the best possible way for them to use these advanced technologies to help themselves and help the consumer market as well.

Rachael Everly is an undergraduate information and technology student who writes on topics related to business, finance, technology and education. Currently, she is working for Quip Enterprises LLC, a leading machinery trader that offers used heavy equipment to its customers.