Home / Spotlight / A Better Journey: Using the IoT in Smart Transportation Systems
Produced by RTInsights in collaboration with Red Hat. 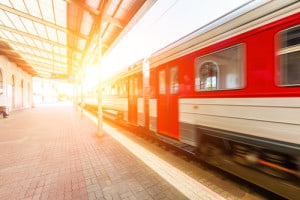 Transportation is the underlying network that makes modern society run smoothly. Life would be exasperating without public transit, and primitive without the trucks, ships, and cargo airlines that deliver food, gasoline, and other necessities.

As economies grow, demand rises especially for public transit. According to a report from the International Union of Railways (UIC), “the demand for long-distance rail journeys is already growing in many countries,” many of which are considering high-speed rail systems. In less populated regions, meanwhile, rail transport is expected to provide the “best value for the money” to enable mobility.

Yet transportation systems in many areas suffer from under-investment and old infrastructure. Boston built its first subway in 1897; transit systems in New York and Chicago were first built at the turn of the 20th century. Newer systems such as the Washington, D.C. Metro started operating in 1976. The first high-speed rail systems in Europe, meanwhile, debuted in 1981.

While coping with old infrastructure, public transportation systems must meet enhanced safety requirements to prevent accidents. They also face challenges competing on price and customer service with airlines as well as innovative companies such as Uber. Customers today expect a smooth experience, free from unnecessary delays, and public transit has not historically performed well on that measure.

According to the UIC report, the rail industry needs to develop more innovative and cost-effective ways “to increase punctuality, safety-security and capacity, improve performance at a system level, and remove barriers to seamless intermodal transport and railway interoperability.”

Below, we’ll take a look at how intelligent transportation systems can achieve those goals.

Train operators normally rely on predefined schedules, track signals, and operational rules to ensure a safe journey. But a positive train control (PTC) system, which consists of IoT-enabled track equipment and analytics, enhances situational awareness, allowing rail operators to see the future state of a track. A PTC system can determine the precise location, direction, and speed of trains; warn of potential problems; and take action to prevent collisions and derailments.

Although public transportation is one of the safest means of travel – far safer than driving a car – accidents do happen on both passenger and freight trains. For example, in 2015, an Amtrak train derailment in Philadelphia killed eight people and caused 46 serious injuries. Amtrak paid $265 million to settle lawsuits related to the derailment.

In a report on the Amtrak accident, the U.S. National Transportation Safety Board pointed to a lack of situational awareness. The engineer had accelerated to 106 mph at a curve where the speed limit was restricted to 50mph. Distracted by another rail accident, the engineer thought he had already passed the curve. The NTSB noted that positive train control had not yet been implemented on the track where the train derailed.

A Look at PTC Architecture

There are several components in a positive train control system, all of which are designed to override human error and provide situational awareness of track conditions:

But implementing a PTC system is costly. The American Public Transportation Association estimates commuter and passenger railroads will need to spend approximately $3.5 billion to implement the technology. Costs for compliance may escalate as railroads move into implementation. Railroads that do implement PTC, however, stand to benefit from enhancing capacity on lines, improved service reliability, faster running times, and better track maintenance.

Union Pacific, which maintains a nationwide network of freight lines, has already invested about $2.1 billion in PTC, installing 15,271 miles of track with PTC signal hardware, and equipping 2,016 locomotives with PTC hardware and software.The company has also installed sensors on tracks that scan bearings for temperature patterns, to determine if a part might need to be repaired. With the new technology, the company has reduced derailments by up to 80 percent.

Smaller railroads, however, don’t have the working capital of large rail lines like Union Pacific, yet they are still required to meet PTC requirements. To address the needs of smaller railroads, Herzog Technologies, a leader in wayside signaling and communications systems, has launched the first hosted, affordable PTC solution in the market.

Herzog has implemented on-premise PTC solutions for its customers, but “a lot of railroads don’t have the staff, the expertise, and, most important, the money to implement the same kind of system as larger Class 1 railroads,” said Travis Rollings, Director of Office Systems at Herzog Technologies.

For the hosted solution, using a private cloud was a key piece of the architecture when it came to PTC back-office operations, which communicate with dispatch and ingest information from wayside IoT devices and the locomotive.

These technologies serve as a backbone to the complex IoT analytics involved in a PTC data architecture: Red Hat Satellite manages the complete lifecycle and security of Linux environments, while CloudForms serves as a comprehensive cloud management tool.

Herzog said the use of open-source technology from Red Hat helped reduce its PTC deployment time as well as IT and administration expenses. The company also sees a new source of revenue coming from hosted software.

Business insight: Transportation systems are required to install Positive Train Control systems to enhance safety. Such systems involve IoT automation and can be expensive, but leveraging stable, open-source technologies in a hosted PTC solution can reduce IT costs and deployment time, as well as ensure system resilience.

A large part of Uber’s success comes from its ability to offer customers a smooth experience. Rather than dealing with the aggravation of trying to find and hail a taxi, a passenger gets a clear visual when Uber will arrive and how long it will take to get to their destination. Payment is simple and quick using a stored credit card on the Uber app or in PayPal.

Hop on a public transportation system and the experience can be rocky. U.S. commuters wait on average 40 minutes a day for public transit.

Another obstacle is the ticket machine. In 2014, before LA’s Metrolink offered mobile ticketing, the system received 500 reports per month of ticket machine problems, including vandalized and broken units, as well as user errors. The ticket machines were 22 years old, and occasionally all of them at a single station were out of service.

In San Francisco, buying a ticket for BART (Bay Area Rapid Transit) can be unnecessarily complicated. A rider must determine where they are traveling on a map, identify the correct price for their destination, insert money or a credit card; use buttons to add and subtract value; and finally purchase a ticket. Long lines can be seen at the machines during peak hours as tourists and occasional riders figure out how to use them.

The Nassau Inter-County Express (NICE) was the first U.S. bus system to introduce a mobile ticketing platform. Normally passengers had to pay $4.50 for a trip, which caused delays as passengers fumbled for dollars and quarters. The app now reduces waiting times at bus stops, which helps speed bus routes and reduce rider hassle. The system also notifies passengers when the next bus will arrive, and collects rider data that can be used by NICE to enhance services.

The city of Ningbo, China, launched a smart city project which included a mobile app for city services. By using the app, passengers save 10 minutes of waiting time on average for a 50-minute bus journey and 15 minutes by finding a parking space in the city center more quickly. In its first five months, the city also saved $163,000 in traffic management and facility maintenance costs and $1.6 million by avoiding potentially duplicative government spending.

Better fare collection with the IoT

All central data-processing functions reside in a virtual private cloud hosted by Amazon Web Services, allowing Genfare to gain the many benefits of not having to set up and maintain its own data centers.

In another example, Eurotech created a cloud-based passenger counting system for TEB, a tramway operator running a busy line from Bergamo to Albino in Italy. Eurotech’s Passenger Counting Device allows TEB operators to plan routes in real time, optimizing fleet dispatch in response to rider demand. The counting devices send data to gateways, which send the data on to the cloud. Red Hat JBoss A-MQ, which sits in the cloud, acts a message broker between the cloud and devices.

“As cities grow, people need to be able to go from their houses to work without sitting in traffic for an hour and a half. If public transportation doesn’t keep pace with digitization, the amount of congestion that will happen will be overwhelming,” said Darren Dickson, president of Genfare.

Business insight: The “onboarding” experience in transportation systems can be frustrating. Current transport networks lack flexible customer payment options and real-time route planning capability and are losing customers to companies such as Uber that offer these capabilities. Use of IoT-enabled ticket machines, flexible payment options, gateways, and the cloud allows transportation systems to enhance the customer experience; gain a better understanding of ridership; reduce maintenance costs; and engage in dynamic route dispatch.

Where edge devices are concerned, effective IoT architectures often require gateways that can aggregate data from edge devices and send them on to business applications in the cloud or datacenter. The gateway layer can also execute real-time actions and rules.

Such an architecture can be used by smart cities to reduce congestion on roads and reroute traffic, fight crime with intelligent lighting and gunshot detection technology, or optimize manufacturing, supply chain, and inventory control.

For example, the gateway may carry a business rule to shut off a piece of equipment in a factory if a certain data profile comes from the edge device, or optimize bus dispatch based on the number of riders at certain stops on a route. More extensive analysis may take place in the cloud or datacenter, which is looking at data from multiple gateways.

A compelling reason to use gateways is that they also enable fast action and operational intelligence. “By the time data from hundreds or thousands of IoT devices is transmitted to a central location or the cloud for quick analysis – even if that takes only a few minutes – the data could lose its value. Response times of a minute or less are crucial for many applications, including power production from solar facilities, driverless cars, smart lighting, security cameras, as well as monitoring ill patients.”

Right Analytics at the Right Time: Transportation and Beyond

Intelligent IoT architectures enable operational intelligence through automation, adaptability, and resilience. A system that allows communication among edge devices, the cloud and the back office or data center allows a business to perform analysis at the right place and right time — whether that is within milliseconds at the edge, in a few seconds in the cloud, or through longer-term analysis of historical data for predictive analytics.

Such an architecture can be deployed in any industry that requires edge intelligence. In aviation, edge analytics has been used to inform decisions on when to maintain aircraft engines and landing gear. In manufacturing, edge processing may inform when to shut down or replace a piece of machinery, a capability known as predictive maintenance, or catch production defects before they occur.

Whether it’s a train system, factory, or airline, the business value of IoT analytics – seen in examples of enhanced safety, customer experience, and real-time operational intelligence – can be a compelling proposition.

Intelligent gateways: Getting started with the IoT