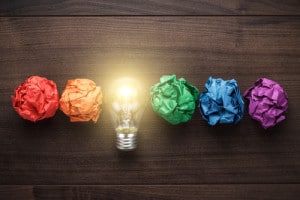 Blockchain technology enables real trust in peer-to-peer transactions. This could revolutionize the real-time operational and trading needs of power grids.

Many people have heard the word “blockchain” in association with Bitcoin, the digital currency that is well known by many nowadays. However, they may not understand what blockchain is or how it’s used. Others may refer to Bitcoin when they’re really talking about blockchain techniques.

Blockchain, though originating with the digital currency as its underlying technology, has been adopted for use in other industries for a range of applications. One of the more innovative uses for the blockchain is in energy grids, including green energy solutions.

What is a blockchain and how does it work?

A blockchain is an encrypted record maintained automatically by computers. It functions over a peer-to-peer network to note every participating point in the system and all activity. The blockchain is thus a public ledger that is available to the entire network, but still anonymous and tamper-proof.   Each computer, or node, in the network, verifies the transactions that are recorded. Every transaction is encrypted so that computers, not people, can manipulate the provided data.

Once a block of information is written to the ledger, it’s nearly impossible to edit or delete, so that there’s an unbroken chain of transactions.  When a new transaction is added, every computer on the network runs check algorithms to verify the integrity of the new information. When these checks are successful, the new transaction becomes another block on the chain. Over time and across hundreds or thousands of nodes, a blockchain may contain a sizeable amount of information.

How can blockchain help with renewable energy?

This involves the use of Renewable Energy Certificates. When green energy is produced, many governments across the globe issue a credit certificate for the amount of electricity going into the public grid. These certificates track how much power is produced by green sources, but they are also tradable and salable between organizations.

The present system of issuing and managing these certificates is relatively slow and quite awkward at times. The chances of error or misrepresentation may deter many investors in green energy technologies.

Recently, there are proposals to implement blockchain technology as a way to regulate certificates in the renewable energy industry.   A peer-to-peer computer network issuing and tracking certificates could be ideal for securely managing these interactions without slowing processes or introducing human mistakes or dishonesty. Built-in functions for issuing, validating, and tracking certificate ownership would have to be introduced to the network in a highly scalable platform to accommodate both large and small energy producers.

How would it be incorporated into a power system?

With the technologies now employed by eco-friendly power plants, every time a given unit of energy is produced it’s registered by a meter and logged in a spreadsheet. This, in turn, is submitted to an approved registry system, which then creates a new certificate. Brokers are then called in to negotiate the buying and selling of certificates between organizations, at which time the certificates are verified again by an independent third party.

Because of all these steps and a dependency on human accuracy, there’s room for error and little oversight for spotting mistakes. These inherent risks are one reason why the cost of managing certificates is fairly high.   Blockchain technology could reduce or eliminate these issues. Through connection to a computer network, the meters which track energy production could write each unit directly into the blockchain. The information would then be validated and acknowledged by other nodes on the network.

This is an existing challenge in blockchain technology. Most blockchain networks can’t support more than several hundred transactions per second.   This is a problem because all servers must reach a consensus on each block before it becomes valid. Unstable networks and malicious software could slow things down even further.

With millions of solar panel stations in use around the world, the scope of such a network is more than current technology could handle.   There are any number of researchers working on the problem. Slowly but surely they’re making progress and iterating various prototypes of a system that could handle thousands or millions of blocks and certificates each second.

How blockchain can transform energy grids

Adding blockchain technology to the power grid makes it possible to exchange energy certificates directly over a computer network. Smart IoT devices can be used to ensure that all transactions are recorded instantly and automatically, Residential and business sources, as well as government regulators, would all have immediate access to the shared information.  Those with solar panel arrays or wind turbine farms producing excess power could immediately sell their energy certificates to competing public buyers instead of to the local utility company as currently takes place.

More residential installations, including hybrid solar and wind solutions, can be designed for and are capable of producing more energy than the property owners require.   Renewable energy sources at a small scale have no choice but to accept what their power company is willing to pay under the present system.

In many areas across the U.S. and the world, customers have only one power company, something the renewable energy industry is hoping to change.  The International Energy Agency predicts solar power will be the most popular global energy source by 2050. Rising demand and falling prices suggest that solar energy prices will be cut in half by 2020.   However, a central system for coordinating buyers and sellers would represent a high infrastructure investment. This is something small green energy producers may not be able to afford. A distributed and flexible blockchain system is much more efficient and affordable so that even very small sources could sell their excess electricity within their own community.

The global demand for sharing renewable energy relies on tracking energy certificates. Blockchain technology is poised to become the standard technology for managing these certificates in the near future. Transactions taking place over a peer-to-peer network mean reduced time and labor, fewer errors, greater security, and lower costs. There will be no need for intermediary brokers, while a decentralized system with no one point for failure means greater reliability for all concerned.

Heather Redding is a part-time assistant manager and freelance writer from Aurora, Illinois. She is also an avid reader and a tech enthusiast. When she is not working, Heather enjoys learning about new tech developments over a cup of coffee.