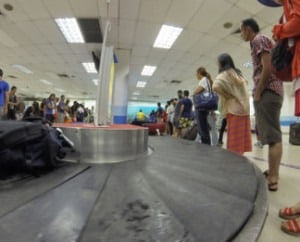 Losing track of luggage is unacceptable when airlines can use IoT technology to track baggage every step of the way.

Recently, Delta Airlines was scheduled to take my family from Boston to Detroit to Rome, so we could drive to Tuscany, but the trip went off the rails. To make a long story short, due to weather conditions we were rerouted onto several flights that did not go as planned. We finally had to run to another terminal to fly with Air France.

Air France took us to Rome — but without our bags. The people at baggage claim were pleasant but could not give us any information, so they tried to placate us by saying the bags would likely arrive on the first flight the following day. We took them at their word and cut our trip to Tuscany a day short so we could go with our bags.

The bags did not arrive and accurate information was not forthcoming. We went to Tuscany and spent the next four days calling Delta, Air France’s bag tracking office, and Alitalia’s Rome office and received different answers until our bags finally arrived. What happened?

Airports are large, complex machines with a great deal of moving parts that are themselves part of a wider air-transport system. The Baggage Report declared that airlines mishandled 21.6 million bags in 2016 or 5.73 bags per 1,000 passengers. While this is a 70 percent drop from 2003, the number is troublesome to those of us with no luggage.

[ Related: Optimizing Production With RFID ]
The story above illustrates the airlines’ issues with baggage tracking and communication. The Internet of Things (IoT) provides some solutions that have been used for years. The questions are which solutions are the most effective and how to ensure all the major players can use the information to better serve themselves and their customers. Airlines can be forgiven for not transferring bags in some situations. However, losing track of the bags is unacceptable when we can use IoT technology to track baggage every step of the way. 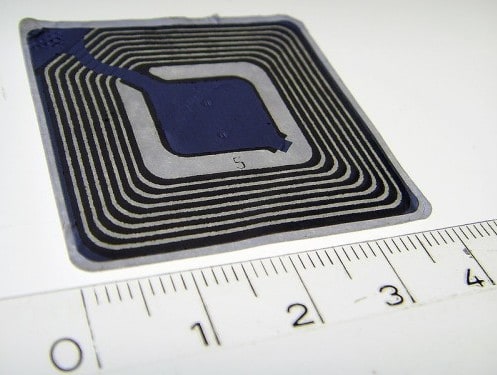 An RFID chip measured against a ruler; one of these can be thrown into a baggage tag (Source: WikiMedia Commons)

The airline industry has devoted a great deal of work to solving the issue of tracking luggage, but has not settled on a solution yet. One of the cheaper options being feted is the use of Radio Frequency Identification (RFID) tracking technology. Last year Delta added RFID chips to its baggage tags and gave its customers the ability to track their luggage via app 99.9 percent of the time across 344 of their stations. Delta says this will allow bags to be tracked more quickly than rescanning the barcodes on the bags.

While RFIDs by nature work only within a limited range and are thus useless on the tarmac, Delta seems to believe this will work well enough for its customers. Delta is not alone; other airlines such as Qantas and Lufthansa experimented with the technology and Hong Kong International Airport and McCarran International in Las Vegas use it already.

Unfortunately, while Delta has already installed this in dozens of airports such as Boston’s Logan Airport, not all companies that use RFIDs can understand each other’s RFIDs and not all airlines use RFIDs. For instance, Air France does not use RFID tags; instead it uses permanent bag tags that connect to the Internet, or “eTags,” to allow people to check in their bags more efficiently and track their bags all over the world through their app.

This works only if the passenger owns an eTag. As RTInsights reported, non-air travel companies are developing their own luggage tracking solutions. The travel accessory company Tumi partnered with AT&T to create the Tumi Global Locator, which, like the eTags, uses GSM and GPS technology to help people track bags. These solutions are of little help if the companies do not share information. This is more than an IoT issue.

IoT technology alone is not enough

At first, I thought that technology alone would improve baggage handling, when in reality the industry also needs more standardization and cooperation. Delta and Air France may operate out of the same airport and are in the Skyteam air alliance, but they lack compatible technology. If such solutions are applied across airports instead of a few airlines, it may improve tracking. However, it would not solve the problem of tracking the bags across different airports.

One airport may take advantage of eTags, but the airport at the connecting flight may not have the technology to use the tracking information from the eTags. All of this ignores the questions of privacy and security, since bags could be targeted for theft or tampering by third parties and tags could be modified or cloned without proper encryption. Therefore a baggage solution will have to be developed, and negotiated, over time.  We already have several possible solutions to the technology questions. Now we just need the companies in the industry to agree on some standards to help track bags so that even if a bag is left behind, it is never lost, even temporarily.