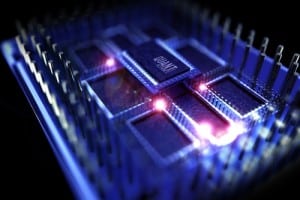 “If companies can access a quantum computer through an API in the cloud, they can take advantage of the speed without that overwhelming overhead.”

Recently IBM announced its first foray into building commercially-available quantum computing systems, which the company is dubbing “IBM Q.” These systems and services will be available on the IBM Cloud platform—companies won’t be lugging a quantum computer into that one empty cubicle and running it on-premises, but rather through the same platform that makes Watson and other innovations possible.

It just might be time to coin a new phrase—Quantum-as-a-Service.

What makes quantum so special?

As a short primer—so-called “classical” computers encode information in bits, which can either be a 1 or a 0, or “on” and “off.” Quantum computers operate via qubits (a quantum bit), which take advantage of superposition and entanglement. The former means that each qubit can be both a 1 and a 0 at the same time, whereas entanglement means that qubits can be correlated with each other—their states can depend on the other. This allows quantum computers to create more complex switches than on/off, which allows them to parse through data in entirely different ways than classical computers.

Use cases for quantum deep learning

Quantum computers are remarkably complex, expensive, and difficult-to-build machines—far more than any typical server rack. They simply aren’t a product that most companies could ever keep on-premises, and the cost puts them out of reach, much like supercomputers. But if companies can access a quantum computer through an API in the cloud, they can take advantage of the speed without that overwhelming overhead. And quantum has some very appealing capabilities for companies that want to take technologies like machine learning to their very edge.

According to IBM, traditional machine learning, such as what’s found in Watson, runs fine on classical computers because it’s all about finding patterns in existing data. Quantum computers take this one step further. When there isn’t enough data for classical computers to see patterns, quantum computing can process possibilities on a different order of magnitude. That equates to more complex and expressive deep learning.

What are some examples of these “unsolvable” problems? IBM highlights supply chain logistics, financial services, artificial intelligence, and cloud security as high-value targets. For the supply chain, quantum computing can be used to calculate a massive volume of possibilities to help optimize fleet operations, particularly during risky times, such as during the holiday season. In the cloud, IBM expects improvements in private data safety by analyzing risk and making smarter recommendations.

As mentioned earlier, AI might get a boost by helping machine learning algorithms process and search through much more data at a faster pace. Indeed, it will be interesting to see how IBM might integrate its quantum innovations with the existing Watson platform.

Via the IBM Cloud, customers will be able to connect to the quantum processor, work with individual quantum bits, and explore tutorials and simulations to help them understand what else they might get done on the new platform. The idea is to build an ecosystem around providing resources that help people understand how they might take advantage of quantum computing’s benefits over classical computers.

To that end, IBM has already made the specifications for its new Quantum API available on Github so that anyone can start tinkering. They’re also building out a library of sample scripts that help demonstrate in more concrete ways about how people might use the API.

Arvind Krishna, senior vice president of Hybrid Cloud and director for IBM Research, said, “Following Watson and blockchain, we believe that quantum computing will provide the next powerful set of services delivered via the IBM Cloud platform, and promises to be the next major technology that has the potential to drive a new era of innovation across industries.”

IBM says that since Q’s inception, 40,000 users have run more than 275,000 experiments that had lead to 15 research papers, some of which were published in leading journals. World-famous MIT is using IBM Q directly in the classroom, with more than 1,800 students experiencing an online curriculum that allowed them to run experiments on the quantum processor to test computing principles and other theories.

The current quantum computer can handle 20 qubits, but the company says that a system with 50 qubits “may be able to perform certain complex calculations at a rate that today’s top multi-Petaflop supercomputers can’t yet emulate.” As long as IBM can get the hardware right, they just might be building a platform that solves real-world problems at a pace we never thought possible.