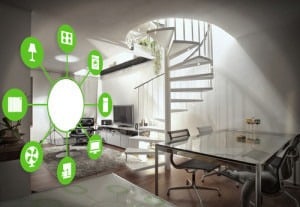 “The statistic we see again and again is that the cloud is not a great place for real-time analytics.”

With so many “things” on track to be connected to the Internet by 2020 — Cisco puts the number at 50 billion — one challenge is analyzing data from all those devices.

“A lot of people talk about doing analytics from the edge,” said Simon Arkell, CEO of Predixion Software, “but not necessarily with an engine on the device at the edge. That’s a distinction we make.”

Arkell spoke with RTInsights ahead of the company’s May 12 launch of its RIOT visual edge analytics engine, which can come pre-installed on devices. There are two options: RIOT Nano can be installed on devices as small as a Raspberry Pi, while RIOT One is designed to be installed on larger devices such as gateways or integrated with operating systems.

Predixion, named as a visionary in Gartner’s 2016 “magic quadrant” for advanced analytics platforms – largely due to the company’s strength in IoT — estimates their approach has tremendous upside. Among chip companies, the total available market for IoT CPUs is 12 billion units, and the gateway business alone for Intel – which is a partner and global reseller of Predixion — is 30 million units in 2016.

Predixion is also eyeing industrial uses in asset performance and predictive maintenance, such as in smart factories or at a wind power plant. While similar IoT use cases are targeted by General Electric (also a Predixion partner) and Dell, Arkell said Predixion’s deployment model is different.

IoT architecture: why start at the edge?

Cisco, also a Predixion partner, has made a global push in what it calls “fog computing” — which is roughly the ability to perform analytics at any point in a network — from an edge device, a gateway or router, and all the way to the cloud.

To achieve that IoT architecture requires devices capable of analyzing data, and Predixion’s business model involves sharing revenue when RIOT is pre-installed on original equipment, integrated into a system, or resold.

The RIOT Nano version uses native C++, while RIOT One is embedded on Java devices such as gateways.

That contrasts with an approach where agents are embedded on devices and gateways and the data is pushed somewhere else, perhaps undergoing filtering or aggregation before analysis.

“The statistic that we see time and time again is that the cloud is not a great solution for real-time analytics,” Arkell said, because “90 percent of that data never makes it to the cloud in the first place.”

Some environments have limited bandwidth, he said (see here), and the ability to perform edge analytics in manufacturing or aviation can not only protect expensive equipment but also lives.

There’s also an issue of economics.

“If you try to send 100 percent of your data to the cloud it can become cost prohibitive,” he said.

Visualization at the edge 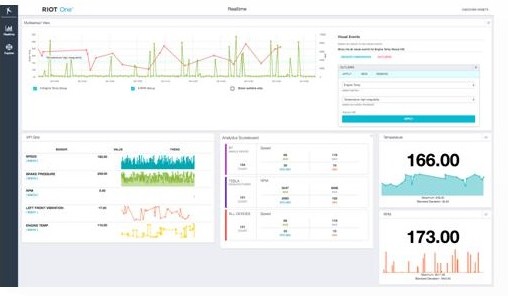 The RIOT One dashboard is a drag-and-drop interface for edge analytics.

It’s one thing for a device to shut down or issue an alert when it reaches a certain threshold – something as simple as a smart thermostat or heart-rate monitor can do that automatically via a simple rule — but it’s a different challenge to produce a visual analysis of multiple data variables in real time, and find predictive meaning in the stream.

In many cases, IoT edge devices produce “sophisticated patterns that can be compared,” explained John Crupi, Predixion’s chief architect of IoT analytics. When visualizing edge device data, businesses can identify potential outliers or issues they need to drill into and analyze.

The analytics engine in RIOT “does everything from model execution for predictive analytics to patterns in analytics … and they can push those results out either directly to the cloud or to a gateway or a combination of both,” Crupi said.

Analytic scripts can be deployed using R, PMML, or Javascript. Using RIOT’s user interface, a customer can point their browser to a gateway “and see all the analytics coming from all the devices,” he said.

That doesn’t mean the cloud is out of the picture, nor a panoptic view of data. An upsell offering from Predixion. RIOT Enterprise, allows an aggregated view of data from gateways and devices through the cloud. 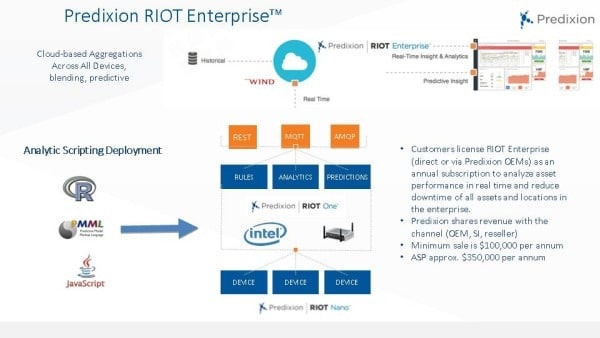 Predixion IoT architecture. The RIOT Nano sends data onto a gateway. Analytics can be performed before sending data to the cloud for further analytics (including historical).

Data streaming at the edge: IBM and Apache Quarks

Why edge computing is here to stay: five use cases