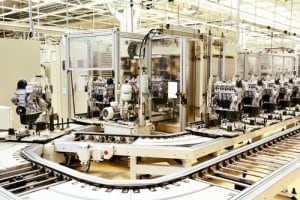 The race is on among the global manufacturing base to digitize existing operations and convert factories to digital hubs for tomorrow’s growth.

They say the success of the space program — capped off by humans walking on the moon in the late 1960s and early 1970s — was the result of a competitive environment, particularly between the United States and Soviet Union.

See also: How to measure IoT’s impact on “smart manufacturing”

However, we’re only at the beginning of this race, and many hurdles remain. That’s the gist of a recent report published by the Information Technology and Innovation Foundation (ITIF), which summarizes both national and corporate initiatives to get digital manufacturing off the ground. Once it does, it’s implications for real-time design, innovation and immediate delivery are enormous. “There remains a long way to go before this vision is fully realized across a national or global economy,” says Stephen Ezell, author of the report and VP with ITIF.

Tellingly, he points out, “U.S. manufacturing productivity grew just one percent from 2011 to 2016, the slowest recorded rate since 1948 when the statistic was first measured. Similarly, over the past decade (December 2007 to December 2017), U.S. labor productivity grew at an anemic annualized rate of 1.1 percent.”

Once it does take off in a big way, digital manufacturing has great promise. “This digitalization of manufacturing is changing how products are designed, fabricated, used, operated, and serviced post-sale, just as it’s transforming the operations, processes, and energy footprint of factories and the management of manufacturing supply chains,” says Ezell. “This convergence of digital technologies with manufacturing industries also promises to recast the landscape of global manufacturing competition.”

The most transformative technology on the digital manufacturing scene is the Internet of Things (IoT), Ezell points out. “In the factory environment, IoT refers to the use of sensors in production equipment (such as robots, stampers, actuators, 3D printers, computer numerical control (CNC) machines, etc.), and the products they make (such as jet engines, gas turbines, radiological equipment, vehicles, etc.) to enable a real-time flow of information about the operational status and condition of the equipment or product.”

Ezell explains how IoT and digital manufacturing have reshaped the production processes of BMW:

“BMW has set a goal of knowing the real-time status of all major production equipment at each company that produces key components for each of its vehicles. Accordingly, upstream Tier 1 and 2 suppliers such as Austrian brake-pad manufacturer Miba AG have IoT-enabled their production equipment in order to track and communicate production machines’ operational status to its original equipment manufacturer (OEM) customers.Germany’s automotive manufacturers don’t want to receive a call from a supplier informing them a brake pad or engine-part delivery will be late, throwing an entire production cycle off schedule; they want to know in real time of any problems upstream so they can immediately evaluate how production schedules will be affected.”

The BMW example points to rising global competition to lead the way with IoT and digital manufacturing. “Competitiveness going forward will be increasingly based around the strength of entire industrial supply chains — OEMs orchestrating their supply chains to maximize efficiency and to most quickly get innovative products to market,” says Ezell.

The following are leading national initiatives to get ahead in the international race to digital manufacturing:

China: “In May 2015, China announced the “Made in China 2025” (MIC 2025) initiative, a national plan focused on the integration of information technology and industry that seeks to make China an advanced manufacturing power across key strategic sectors.”

Japan: “Japan’s standardization strategy is largely based on a top-down approach where the overall direction is determined by the government together with a handful of researchers and pioneering thinkers. However, there are also some initiatives that have adopted a bottoms-up approach and concentrate on the concerns of the research community or industry. In particular, Japan’s Industrial Value Chains Initiative (IVI) attaches particular importance to the concept of “loose coupling,” promoting a modular approach instead of a single Industry 4.0 standard.”

United Kingdom: The U.K. announced what it calls a “Sector Deal for Industrial Digitalization,” which calls for a formalized Industry 4.0 strategy going forward, “building upon the findings of the industry-led Made Smarter 2017 review, which found that industrial digitalization could be worth as much as £455 billion to Britain’s manufacturers and support the development of 175,000 jobs over the next decade. The Made Smarter review called on the United Kingdom to create twelve Digital Innovation Hubs, eight large-scale demonstrators, and five digital research centers focused on developing new technologies as part of a new National Innovation Programme.”