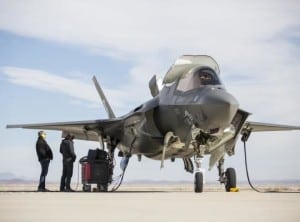 How a 3D solution from Ngrain helped Lockeed Martin to immediately assess the flightworthiness of F-35 fighter jets.

In jet maintenance, it’s the little things that matter. Fighters such as the F-35 Lightning II — a family of fifth-generation stealth aircraft developed by Lockheed Martin – are constantly being subject to the rigors and stresses of speeds exceeding Mach 1  as well as potential combat damage.

Even a small scratch or dent on a wing may create issues. Seemingly small factors — such as the depth of a scratch or the distance of a hole from supporting structures — can impact flight-worthiness, aircraft stealth capability, and pilot safety. Locating potential damage, checking previous repair history, and fixing the aircraft was a time-consuming process that potentially grounded planes for indeterminate amounts of time.

As part of contracts with nine participating governments, Lockheed Martin delivers ongoing F-35 support, which includes training, prognostics and jet maintenance. To address the challenges of regular, rigorous maintenance that can spot small multiple trouble spots before they affect the viability of the aircraft, Lockheed Martin sought to streamline its damage and assessment process.

Traditionally, maintenance technicians would manually assess and track damaged areas by placing a transparent film over these areas and tracing reference points (such as fasteners and seams) with a marker. They would then cross-reference this information with repair data history captured in a spreadsheet.

But the company needed a faster, real-time solution to addressing maintenance requirements as potential issues occurred.

As soon as a plane lands, a technician enters the aircraft’s tail number into a tablet computer. The solution recognizes these numbers and immediately displays historical damage and repair data for the particular aircraft. The technician then enters metadata — such as damage type and dimensions — which is stored in the ALIS backend for future retrieval. The solution can be used to identify location of damage, insert photos and notes, as well as visually locate parts for ordering. The virtual damage assessment software works with other software applications within ALIS to help maintainers quickly assess whether or not damages adversely impact aircraft mission capability.

US Air Force maintenance staff report the system makes it easier to visualize damage repair data, and repairs are enhanced with immediate access to historical aircraft information post-operations. The ability to determine flightworthiness is now immediate upon landing — maintainers on the flight line can connect to the database and immediately determine whether the aircraft is flight-worthy.

The system also enables maintenance staff to capture data more accurately. Providing maintenance staff with the ability to visualize and accurately represent aircraft damage on a 3D model reduces the probability of maintainers making mistakes, which translates into safety for pilots.  The program has also been extended to the F-22 Raptor fighter jet as well.