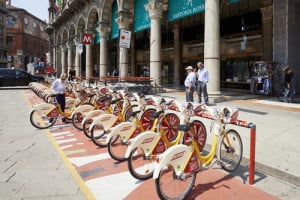 Vehicle-sharing services, like bike-sharing, will grow due to the rise of smartphones, possibly becoming the main form of travel in the autonomous future.

Nothing screams “world of the future” more than a large industrial machine that is summoned by a smartphone to go for a ride. In the whole discussion about the end of the ownership economy, we forget we have had vehicle-sharing services as far back as 1948.

Rental services such as Avis and Europcar can be found in places such as Heathrow Airport in England and Puerto Varas in Chile to give tourists and locals a way to travel between business meetings or grab groceries. In recent years car subscription services such as Zipcar allow customers to rent vehicles for as little time as an hour with 30 minutes advance notice.

Bike-sharing services such as Hubway in Boston and Vélib’ in Paris give similar services to Zipcar: find a bike, rent it out, do your work, bring it to a designated location. In the future, vehicle-sharing services will grow due to the rise of smartphones and they may become the dominant form of travel in the autonomous future.

Smartphones allow users to locate and rent connected vehicles instantly. Perhaps the best-known example of this is the Chinese bike-sharing service Ofo. Whereas some services such as Hubway require you to find a place to pick up, and drop off, a bicycle, Ofo allows you to simply locate a bike, pick it up, unlock it with your phone, ride, and then lock it in a safe and legal place for as little as 1 yuan (14.5 US cents) per hour. Ofo has 2.2 million bikes across 43 cities in mainland China alone, and there are more than 40 other such services across the country. 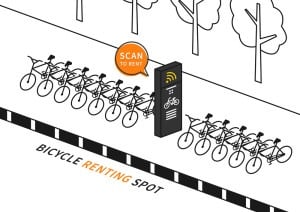 As revolutionary as bike-sharing is in a world of individually-owned vehicles, Ofo and its compatriots are experiencing growing pains. The Singaporean government and three major bike-sharing companies, Ofo, oBike, and Mobike, agreed to create a single app for reporting illegally parked bikes and working with the bike-sharing services to install geofencing technology to enforce legal parking by the end of 2017. Parks, such as Shenzhen Bay Park, are overwhelmed by these shared bikes (Follow the link for some unbelievable pictures). Shared bikes also overflow many Chinese subway stations.

Another growing pain involves children who hurt themselves riding and racing these shared bikes. It is illegal for Chinese children under the age of 12 to ride bicycles and tricycles on the road. In response to such claims, the bike-sharing services are cooperating with regulatory authorities to make shared bikes safer.  Ofo alone is worth $1bn, so it is worth it for bike-sharing services to stay and grow this lucrative market.

Any automobile company that wants to follow in Ofo’s footsteps should consider the lessons the bike-sharing services are learning. Bicycle theft is already an issue, and one can see how people may try to steal the cars they are “sharing,” autonomous or not. If the phone’s access can allow one to control a vehicle, then a criminal can steal a phone and make another person pay for the car’s use- or impersonate the person in another crime.

One could circumvent such issues by requiring a separate form of identity such as an ID card or biometric data, which can also ensure the prospective riders are old enough to ride, but this could prevent people from calling a vehicle for someone else. For instance, if someone wanted to summon a vehicle for one’s grandparent, that person would have to make sure the vehicle will allow the grandparent to get in.

Cities may find themselves overwhelmed by shared cars. The customers may not want to rent vehicles they cannot park, which would favor ride-sharing services such as Uber. This would change in an autonomous future where the vehicles could pick you up, drop you off at your destination, and then find a legal place to park.

While Ofo does not have to worry about fueling bicycles, car-sharing services will have to decide when a vehicle has to be fueled and/or charged. Presently, car rental services record how full the tank is and charges you accordingly. With autonomous vehicles, it is a straightforward formula to calculate gas consumption, but car-sharing services will have to calculate when the vehicle has to be charged.

If there are multiple riders for different amounts of time and the car is neither serviced nor monitored in-between rides, it will be difficult to create formulas about who owes what and when the vehicle should be cleaned or serviced. There are similar concerns about liability. If a rental car is damaged then the driver is supposed to report the damage. However, if a car is reserved like a connected shared bike, then the car is not supervised while waiting for a customer to pick it up. The service owner will have to be responsible for cleanliness and damage to the car while it is waiting for a customer.

Car-sharing services may find maintenance a challenge since they may not be aware of the cars’ status between clients and thus lose clients due to filthy cars. Companies could track the condition of vehicles with cameras.  However, cameras could bring up privacy issues, which could discourage more privacy-conscious customers.

If different countries have different rules regarding autonomous vehicles, as is true today, riders will have to be made aware that the car cannot move beyond certain boundaries. There are other complications that have to be addressed. For instance, what if someone ends a ride prematurely, or jumps out of the vehicle before its ride is complete? It is possible that someone may be trying to evade tracking by one method or another, but it is also possible that someone had to use the bathroom and spent so much time there that the vehicle marks the ride as “finished” and moves on to the next fare. As one can see there is a lot of promise to this model and it may become the dominant model, yet it will be fascinating to see what other models may be developed.